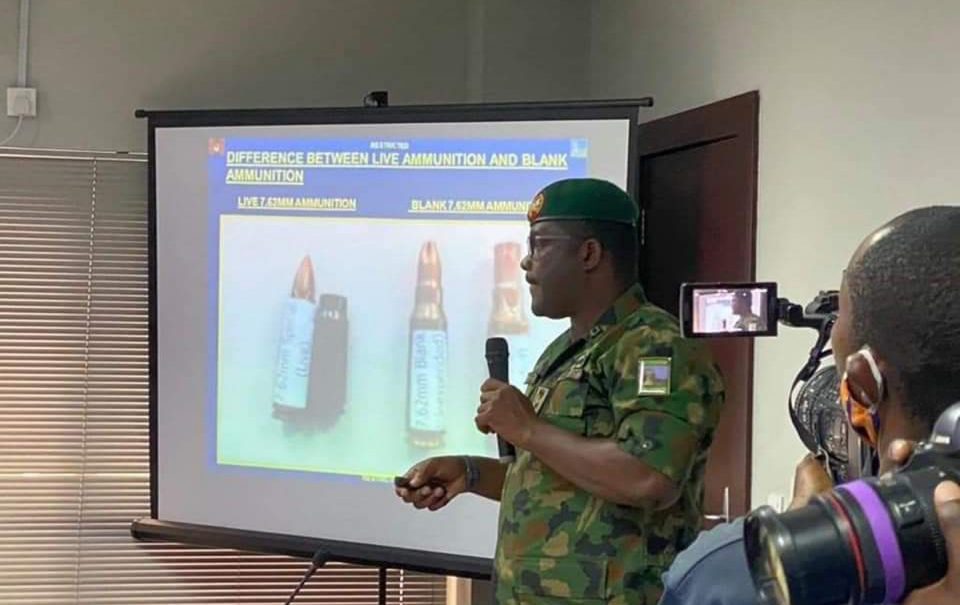 Taiwo made the revelation while being cross-examined at the Lagos State Judicial Panel of Inquiry for Restitution for Victims of SARS Related Abuses and Other Matters on Saturday.

Taiwo said that Bello was the Commanding Officer of the 65 Batallion which was at the Lekki Tollgate on the evening of Oct. 20, and that Omata was present at the scene with him.

He said that Bello who was the Commander on ground had given the order for the soldiers to shoot in the air.

While answering questions from Mr Adeyinka Olumide-Fusika (SAN), the counsel for some #EndSARS protesters, the army General said that he was not aware that Omata had allegedly arrived the scene to stop the shootings.

“He was there after the shooting in the air, he was there to employ non-kinetic (non-violent) means,” he said.

While being cross-examined by Mr Adeshina Ogunlana, another lawyer for the #EndSARS protesters, Taiwo also threw more light on the roles of the senior officers at the tollgate.

“Bello had arrived the scene first before Omata, as the whole 81 Division Garrison had been given the mandate to secure the whole Eti-Osa corridor.

“Omata had left Obalende to meet up with Bello and patrol the whole area,” he said.

Taiwo said that he had contacted Bello when he was seeing conflicting reports about the shootings at the Tollgate on social media, the internet and other sources.

He said: “On the internet, we were seeing videos being streamed of shooting and of people screaming that they are killing us and videos to that effect.

“When the initial first report came, I dismissed it with a wave of the hand because to me nobody sent anybody to the tollgate, I knew that people were to be dispersed along the Eti-Osa corridor.

“When I called Bello he said that while they were being deployed, they were attacked by hoodlums and they released some shots into the air.

“I also asked him if anybody had died as it is being reported over the internet and he replied ‘negative’ that nobody had died that he had only seen two people who had fainted and were revived,” he said.

The army witness also said that he spoke to Omata at about 7.35pm through Bello’s mobile phone.

“I had called three times and after speaking to Bello, I spoke to General Omata using Bello’s phone. It was one of those instances that when I called Bello he said Omata was with him.

“I spoke to Omata and asked if deaths were recorded and he told me no. I called him twice and he said no, that the place has been cleared.

“The place was cleared at about 8.45pm and they said they were going back to their respective units. Later in the day, they went out again at about 11pm,” he said