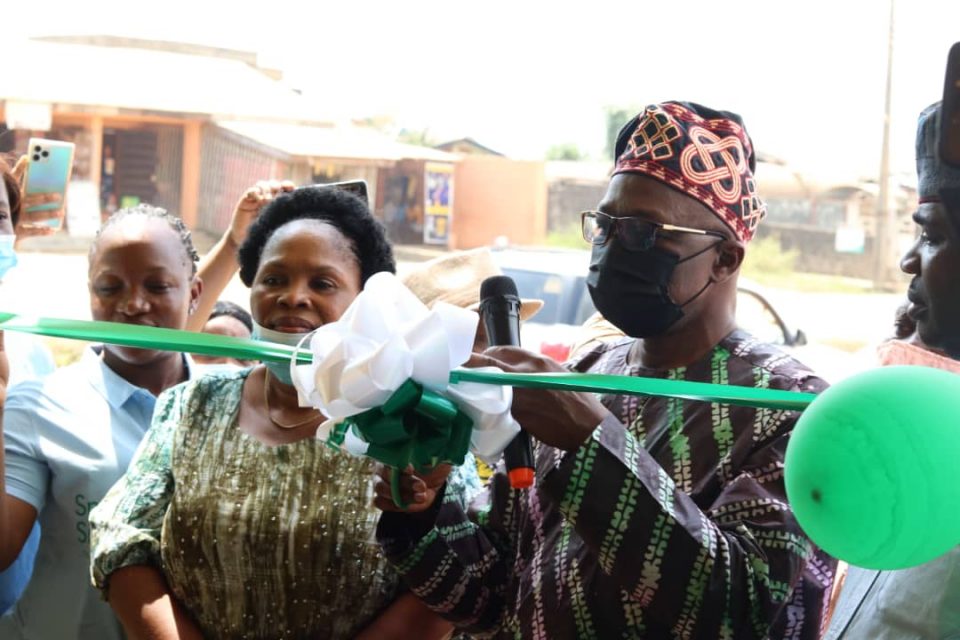 By Abisola THOMPSON
As part of its Corporate Social Responsibility in giving back to the society, an indigenous meter manufacturing company,  MEMMCOL on has donated an ultra modern four classrooms to Orimerunmu  Primary School, Obafemi Owode Local Government, Ogun State for easy learning process for pupils in the community.

Commisioning the project, the Ogun State Commissioner for Education, Science and Technology, Prof.Abayomi Arigbabu, who commissioned and received the facility on behalf of the State Government, commended  Momas Electricity Meters Manufacturing Company’s investment in public schools in the community and charged the management to take full advantage of the facility to “upscale the pupils academic performance and competitive exploits”.

Arigbabu said this at the official commissioning of the project at the weekend in Ogun State that this singular act of MOMAS depicts the company’s fulfillment of its social responsibility for the development of its host communities and is worthy of emulation by others.

” This private individual company,  Momas deserves commendation for its laudable initiative and contribution to educational development in Ogun State.

” This is commendable effort from MOMAS as part of their Corporate Social Responsibility in contributing to the development of their jost community,” he said.

The Commissioner, however,  said the security and protection of the facility will be done with the support of the community in ensuring the newly built classrooms are protected judiciously.

He said that the State government will look into the illegal encroachment into the school lands by some individuals in the community, while assuring the community that government is going to reclaim the encroached part of the land.

Arigbabu urged other Corporate organisations to emulate what MOMAS has done in this community and also support government under  the adoption of school programs initiative.

In his remark, Engr. Kola Balogun,  Chairman of MOMAS said the official commissioning of the project was part of the company’s 25th Year Anniversary Celebration to contribute immensely to the development of public schools within its areas of operations.

Balogun who was represented by his Chief of Staff,  Mr Hammed Abiodun Saheed  said ” said the project was part of their social investment plan aimed at improving education amongst primary school students as well as other ongoing projects that cut across various sector of the nation’s economy.

He said that ” This is a landmark event.  The company deem it necessary to give back to society as part of its CSR.

” We have adopted the primary  school on our own, this is not the first time we have supported the school.

” We have supported the school with modern toilets building and borehole while today, we built this modern classrooms for the growth and beneficiary of the pupils he said.

He however,  assured adequate maintenance of the faculty, adding that the company will also impacts in other socioeconomic development of its host community.

Mr Theophilus Oluwasanya, the Chairman,  Parent Teacher’s Association (PTA) commended the MOMAS for the laudable project to the community and Ogun State in general.

Oluwasanya said the project is a welcome development, adding that MOMAS has been supportive to the community.

He said that the company had donated a morden toilets and borehole for the school.

The PTA Chairma thanked MOMAS on behalf of the school appealed to the state government to continue to support the school and create the enabling environment for other companies to support education in the state.

The head teacher, Mrs Victoria Kusimo,  commended MOMAS for investing in the dwcelopment of educational sector.

Accorsing to Kusimo, ” today, we are commissioning a story building of four classrooms,  four toilets,  one office and a store. The journey to the construction of this block to the school  is furtherance to the modernisation of Orimerunmu Primary school in Obafemi Owode local government as part of the CSR the management of MOMAS who had previously  donated and constructed school toilets facility, sank borehole with washing hands basin  stands for puouls, hand cleaser and period donation of sratiinariws debug the tenure of my predecessor.

” l pray that god in his infinity mercy will be with MOMAS,  strengthen them more for their impact towards the sucess of the school.  God will enrich your pulse and enlarge your coast,  ” she added.

Magu must answer for all alleged crimes, says PDP