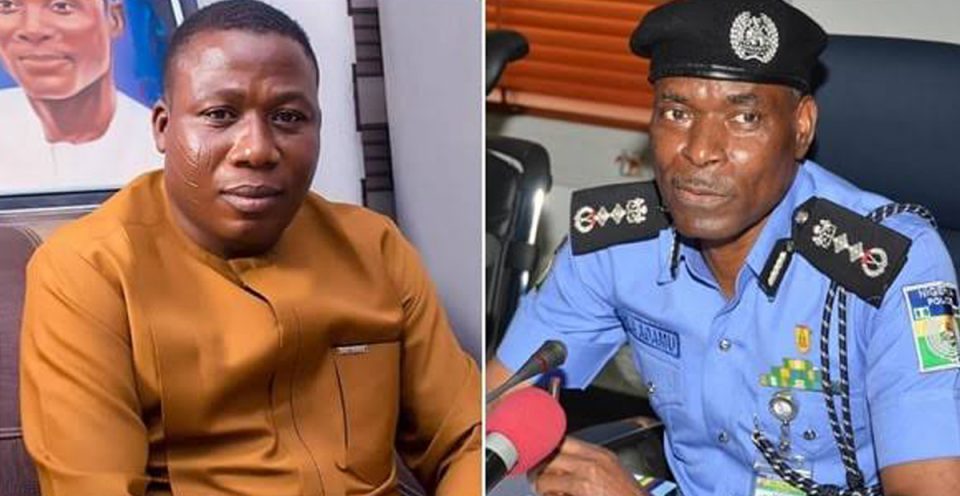 However, the Inspector-General of Police, Mohammed Adamu, has directed the Oyo Commissioner of Police, Ngozi Onadeko, to arrest Igboho and transfer him to Abuja.

Igboho had given herdsmen in Igangan in Ibarapa North Local Government Area of Oyo a 7-day ultimatum to leave, following reports of killings of some Oyo indigenes by the herdsmen.

Igboho blamed Fulanis including Saliu Kadri, the Seriki Fulani, of masterminding the rising insecurity in the area.

But the quit notice had prompted the Oyo State Governor, Seyi Makinde, to call on the IG to arrest troublemakers claiming to protect the Yoruba interest.

“For people stoking ethnic tension, they are criminals and once you get them, they should be arrested and treated like common criminals,” the governor said.

Force Public Relations Officer and Commissioner of Police, Frank Mba, was yet to respond to queries on the update on the arrest order as at the time of filing this report.

Meanwhile, the Arewa Consultative Forum (ACF) has immediately called on the federal and state governments in the Southwest to quickly avert an impending upheaval that might destabilise the country.

The ACF was reacting to reported attacks on the Serki Fulani in Oyo State allegedly by Yoruba youths.

In a statement on Saturday in Kaduna, Emmanuel Yawe, spokesman of the ACF, urged the government to act fast by bringing the perpetrators to book before the situation degenerates into social upheaval.

“The Arewa Consultative Forum this morning received reports of an attack by Yoruba Youths on Alhaji Saliu Abdulkadir, the Serki Fulani in Oyo State.

“In the reports, he was attacked and driven out of his house, eleven cars and his house burnt, with his family members now living in the bush.

“There are allegations that one Sunday Igboho an agitator for Oodua Republic and who issued an ultimatum giving Fulani people seven days to leave Yorubaland is the instigator of the attack”, the statement said.

The statement lamented that the most disturbing aspect of the attack was the allegation that security agents, who were earlier informed about impending attack, “stood by helplessly as the attack was carried out.

“The ACF is worried about this trend and calls on the federal and state governments in the Southwest to move quickly to avert a social upheaval that may destabilise the whole country.”

The forum recalled that the Nigerian civil war in the 1960s started with such attacks and counter attacks like this.

“The governments must be proactive and stop history from repeating itself. Those who carried out these attacks must be apprehended and the due process of the law allowed to take its course”, the statement said.

It also warned that, “If this is not done, there may be counter attacks in the north and the country will be up in flames. The authorities must act. The ACF is very worried and calls on them to act fast.”

But Afenifere, on its part, berated the Arewa Consultative Forum (ACF) over their comments on the recent clashes in Ibarapa local government area of Oyo State.

The body, in a statement entitled “ACF’s Hypocritical Tears”, issued on Saturday by its spokesman, Yinka Odumakin, took exception to the ACF statement wherein they made reference to the event of 1966.

It said: “While we have gone to a great length to sue for peace and have appealed to our pained people to be law-abiding even with the daily provocations of the Fulani and harassment of our people, we frown at the very arrogant and insulting ACF statement especially, their reference to the event of 1966.”

Afenifere further submitted that: “We must make it clear to them that they cannot threaten us with a war at this stage as we will not provoke war but never are we going to run for anybody on our land. We are miffed that a body like ACF that has never shown any remorse over the killing of our people can open their mouths anyhow now because there are consequences for the irresponsible actions of their people.

“We advise them to call their criminals to order and not expect our people to sheepishly wait to be killed by those who value cow lives more than human beings. We do not want a repeat of 1966 event but if there are people plotting such event again, the rain will be over their heads”.

Weighing in on the situation, a former Minister of Aviation, Mr. Femi Fani-Kayode, warned President Muhammadu Buhari to ensure that Sunday Igboho was not arrested and that no harm befell him.

Fani-Kayode gave the warning on his official twitter handle.

“It would be dangerous, reckless and counter-productive for Buhari to arrest or kill Sunday Igboho. When the Northern youths demanded that Igbos should leave the north, no one was arrested. Why should Sunday be arrested or killed for asking killer Fulani herdsmen to leave Southwest?

According to him, the best option for government was to arrest the herdsmen rampaging Southwest, killing and kidnapping the people and not by arresting those standing up and speaking for their victims.

“Sunday did not ask for all Fulanis to leave Southwest. He asked for the killers, terrorists and kidnappers amongst them to leave Ibarapa and the Yoruba people love him for it. Is that a crime?

“As long as he maintains the peace and does not indulge in or encourage any violence, I do not see what he has done wrong? In 1999, when Gani Adams was rising up, I identified him as a young man to watch.

“I wrote an essay about him and I said his courage would take him far. I was proved right. Today, I identify Sunday Igboho who has stood up against wickedness, injustice & apartheid in our land, when other Yoruba leaders were too timid to stand. I commend his courage,” he said.

Concerns Mount over Corruption and Inefficiency in Cash Transfer Programme

WTO: Stiglitz, Others Urge Biden to Back Okonjo-Iweala