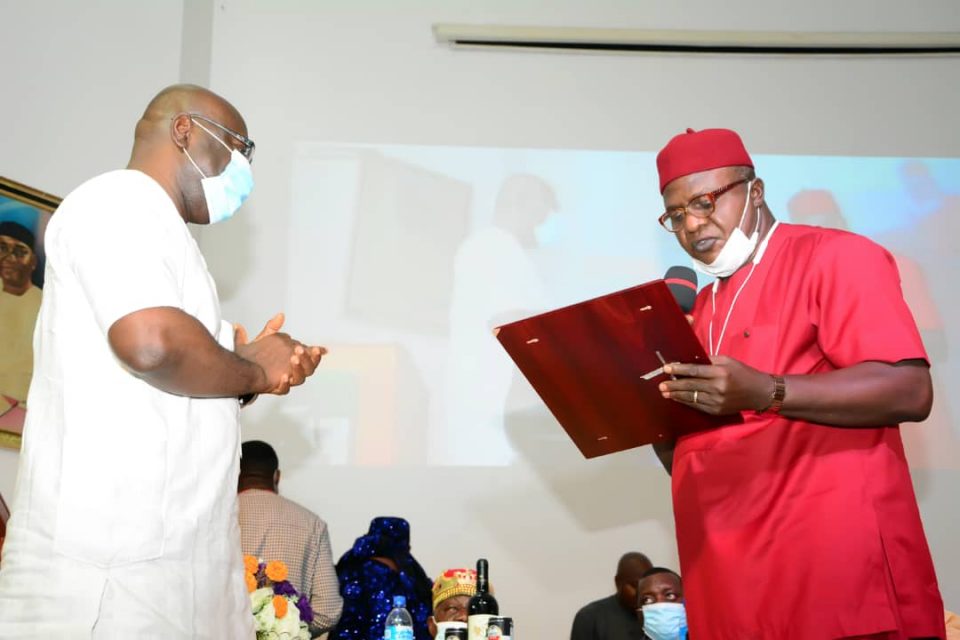 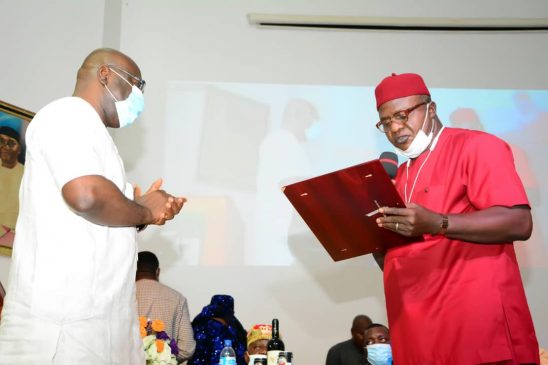 The Anambra State Commissioner for Information and Public Enlightenment, C. Don Adinuba, has received the annual Chinua Achebe Award for Intellectual Productivity for 2021 of the Institute of African Studies of the University of Nigeria, Nsukka, Enugu State.

The award was given at the Chinua Achebe International Conference held from March 9 to March 11 at Princess Alexandria Auditorium in honour of Africa’s foremost novelist, eassayist and social critic whose books have been translated into several languages and sold in millions.

After retiring from the University of Nigeria as a professor of literature in the early 1980s, Achebe returned to the Institute of African Studies at the same university as Emeritus Professor and editor of Okike, The African Journal of New Writing which he founded in 1971.

“It is a great privilege to be honoured in memory of such a great man”, said the commissioner after being presented with the award by Professor Romanus Ezeokonkwo, the representative of member of the university’s senate and a member of the governing council who is also the director of the Centre for Entrepreneurship and Development Research.

“Achebe was by every standard in the world a towering figure, yet he treated my great friend and brother, Okey Ndibe, and myself as though we were equal when we were in our 20s in the 1980s and we enjoyed his confidence. He not just inspired us but guided us well. Therefore, I am quite emotional to receive this award endowed in his memory”.

The theme of the conference was “Reevaluation of African Values in the Face of the Crisis of the 21st Century”.

Delivering a research paper entitled “Towards a More Robust Appreciation of Cultural Values and their Correlation with Organizational Growth and National Development: A Paradigm Shift for Nigerian Higher Institutions, Adinuba called on both the National Universities Commission (NUC) and Nigerian universities to embrace the relatively new approach to cultural studies by world-class universities like Harvard in the United States which link organizational cultural values to superior organizational performance and rapid national and regional development.

“Certain values impede economic progress and while some others encourage progress”, he argued, citing the example of southern Italy which remains undeveloped because of the social values which protect and promote criminal organizations like the mafia while northern Italy is developed like the rest of western Europe because of the absence of such organizations.

The commissioner referred to India as an example of a country held down for 3,000 years by its caste system which is etched in the dominant Hindu religion, saying it prevented millions of so-called untouchables from realizing their economic potential.

Such great Indian entrepreneurs as Jamsetji Tata who were originally victims of the caste system were able to escape wretchedness because they lived outside India and on returning home changed to Budhism which recognized their full humanity.

“Deeply religious societies are not as economically competitive as more secular ones”, he said.

Adinuba asked Nigerian institutions to study differences in cultural values in countries, including African nations, to prepare their students for the “realities of today’s globalized world”.

He revealed that the United Bank of Africa (UBA) subsidiary in Ghana was almost closed down by the Ghanaian authorities when it was opened newly because the Nigerian managers ordered the local employees to work beyond 4pm, as is the practice in Nigeria.

Nigeria, he noted, has a “life-work balance different from Ghana where the people are laid back”.

He also revealed that Nigerian businesses internationalizing into francophone Africa had difficulties with the local employees who insist on closing at midday for two hours to have siesta, as is the case in most French-speaking countries.

“There are other cultural challenges which Nigerian students should be exposed to in the age of globalization.

NPA expects 22 ships with petroleum products, others at Lagos ports

Onyeama Calls For Allocation Of 2% Of Nation’s GDP To Science, Research, Innovation

Cashless policy: Don cautions on what could negate financial inclusion