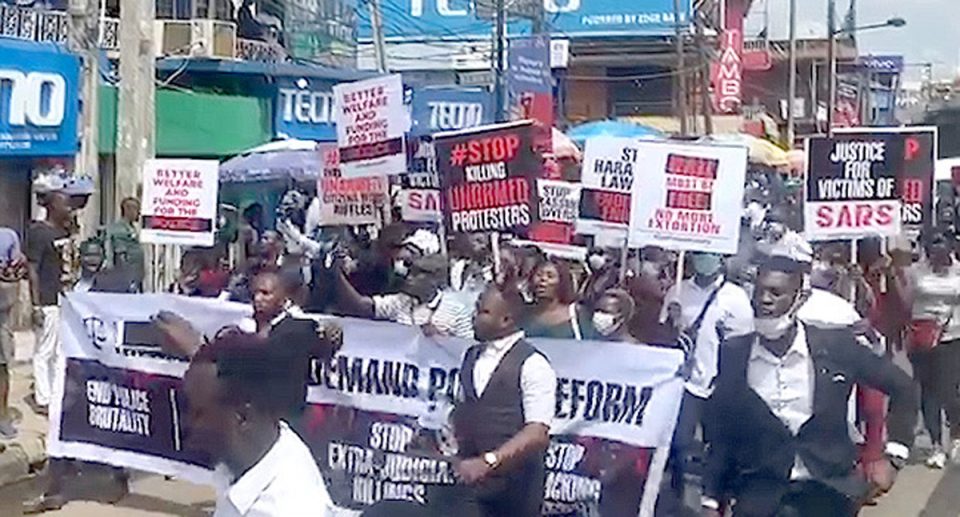 The United States (U.S.) Department of States says there is no verifiable evidence on the reported killings of #EndSARS protesters at the Lekki tollgate on October 20, last year.

It stated this in a report entitled: ‘2020 Country Reports on Human Rights Practices: Nigeria.’

But, British High Commissioner Catriona Laing said Nigeria’s worsening security situation is a source of concern to the United Kingdom.

He said UK was however, prepared to assist Nigeria in the war against insecurity.

There had been reports and claims of massacre at the toll gate by the military during the protests by youths against the activities of the now-disbanded Special Anti-Robbery Squad and bad governance.

The US,  in its  report,  stated that accurate information on fatalities resulting from the shooting was not available.

The report reads in part: “Although the protests were allowed to proceed unimpeded in most places, civil society observers reported the arrest of some peaceful protesters in Lagos, Osun, and Kano states on charges of “conduct likely to cause a breach of public peace.” All those arrested were released within days of their arrest.

“In October, #EndSARS protests were staged in states across the country to demand an end to police brutality. Demonstrations were largely peaceful, but some protests turned violent after criminal elements infiltrated the protests and security forces fired at protesters at the Lekki Toll Gate on October 20.

“According to #EndSARS Legal Aid, by year’s end, a network of volunteer lawyers had secured the release of 337 protesters, but it was unable to confirm how many remained in detention.”

The US department   went on with what it considers a detailed analysis of what transpired on October 20 by saying: “Accurate information on fatalities resulting from the shooting was not available at year’s end.

“Amnesty International reported 10 persons died during the event, but the government disputed Amnesty’s report, and no other organisation was able to verify the claim. The government reported two deaths connected to the event. One body from the toll gate showed signs of blunt force trauma. A second body from another location in Lagos State had bullet wounds.

“The government acknowledged that soldiers armed with live ammunition were present at the Lekki Toll Gate. At year’s end, the Lagos State Judicial Panel of Inquiry and Restitution continued to hear testimony and investigate the shooting at Lekki Toll Gate.”

On human rights abuses generally, the U.S. report asserted that there were reports that the government or its agents committed arbitrary, unlawful, or extra-judicial killings.

“Of the states, 28 and the FCT (Federal Capital Territory) established judicial panels of inquiry to investigate allegations of human rights violations carried out by the Nigerian Police Force and the disbanded SARS units.

The report also condemned “unlawful and arbitrary killings by both government and non-state actors; forced disappearances by the government, terrorists, and criminal groups; torture and cases of cruel, inhuman, or degrading treatment or punishment by the government and terrorist groups; harsh and life-threatening prison conditions.

The United Kingdom advised the Federal Government to be more “precise  about the security support it needs  from the U.K”.

Laing  spoke yesterday at the sidelines of a reception held to welcome home, the 2019/2020 U.K Chevening Scholarship beneficiaries.

She explained that the U.K   team  has been helping the Nigerian military in the areas of training, campaign planning  and  countering Improvised Explosive Devices (IEDs).

Laing said: “We are extremely concerned about the deteriorating security situation.

“Nigeria is facing a lot of problems everywhere. In the Northeast there is  terrorism; in the Northwest, banditry, and kidnapping; in the Middle Belt,  farmer-herder conflicts and  in the South, the Niger Delta conflict everywhere.And the secession movements in the Southeast. So, Nigeria is really struggling.

She said: “We are here to support and help. We have the military team here, who came here after the Chibok girls were kidnapped actually. We are still here training the Nigerian military, helping them to do campaign planning and how to counter IEDs.

“We are here for a long time. This is a Nigerian partnership. Your insecurity becomes our insecurity if we don’t help you tackle it. So, we are here and we are trying to do our best to support you.”

NAF Aircraft on Routine Mission in Northeast Disappears from Radar