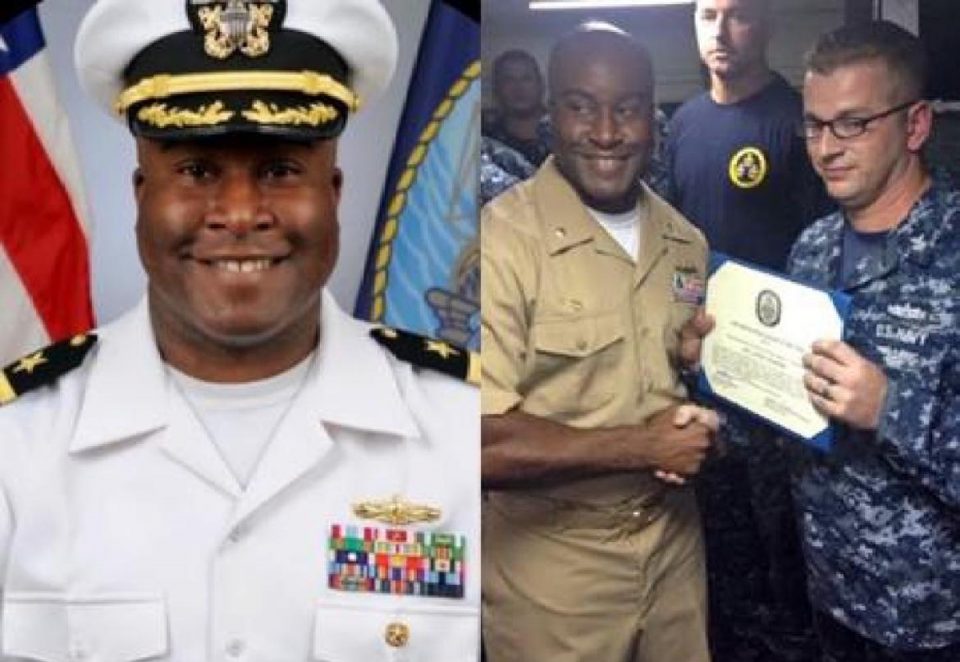 It was honour for a son of the soil, Kelechi Ndukwe, a Nigerian-American US Naval Officer, as he was recently appointed the Commanding Officer of a US Navy Guided Missile Destroyer (USS Halsey DDG-97), an Arleigh Burke-class guided missile destroyer based in Pearl Harbor, Hawaii.

By this appointment, Ndukwe, a native of Okoko-Item in Abia East-Central, Abia State, and graduate of Notre Dame and the US Naval War College, became the first Nigerian-American to command a U.S. Navy war ship.

Before his appointment and eventual take over from DeVere J. Crooks who had commanded the ship since November 2019, he had been serving as the second-in-command.

The new role is the zenith of Ndukwe’s 18-year career in the US Navy, which started with him working as an auxiliary officer in 2003, a year after obtaining a Master’s Degree in National Security and Strategy Studies from the US Naval War College.

During the change of command, Ndukwe spoke about his birth in the US, how his father and mother migrated to the US from Nigeria in 1977 as “poor college students with hopes and dreams, and now their son is the captain of a US warship.”

He also talked about how he has built a great career in the Navy with the help of colleagues.

Addressing the ship’s crew, Ndukwe said: “I am so honoured and excited to serve as your commanding officer. We will approach any day and mission with pride, professionalism and excellence. You are the life of this ship; this crew is the life of this ship. I thank you for your energy, effort and intensity every day.”

He also commended his parents for their exemplary life of hardwork, dedication and the good foundation laid for their children, saying: “I’m the oldest of my parent’s four children, but also the smallest,” adding that “In America, anything is possible.”

To DeVere, his predecessor, he said: “your officer’s legacies will live in Halsey for years to come” and, to his wife, he said, “you are still the greatest decision I have ever made.”

The USS Halsey (DDG 97) is not the first US Navy ship Ndukwe will be commanding, as he had from 2013 to 2015, was the commanding officer for the USS Devastator (MCM 6), a minesweeper based in Bahrain.

According to the Foundation for Defense Democracies (FDD), Ndukwe, a graduate of chemical engineering, has served in multiple warships in various parts of the world including the Mediterranean Sea, Horn of Africa, Arabian Gulf, and Western Pacific Ocean.

A check on his LinkedIn profile states that he has also served in various other roles such as weapons officer and combat systems officer of USS Fitzgerald in Yokosuka, Japan, from June 2010 to December 2011; Navy congressional liaison officer in Washington DC, from July 2006 to August 2008.

While there, between April 2017 to February 2019, he served in the force structure, resource, and assessment directorate which is charged with providing support to CJCS for evaluating and developing force structure requirements and which conducts joint, bilateral, and multilateral war games and interagency politico-military seminars and simulations.

Prior to that role, he had served on the OPNAV N96 as the deputy executive assistant to the director of surface warfare and as the surface strike requirements officer, from June 2015 to April 2017 and March 2015 to May 2015 respectively.

Despite the nature of his job, Ndukwe is a loving husband to his wife, and dotting father to his children, as he in a Father’s Day interview with the USS Hasley’s crew, spoke about his experience during his first deployment as a father, and how he had to leave family including his pregnant wife behind.

“I have left a family behind like so many of those shipmates that I served with before and that I am still serving with now and it can take a toll on you if you allow yourself to dwell on it,” he said.

However, the call to duty has never stopped him from being there for his wife when she was giving birth to the baby — their third child.

“Thankfully, Halsey (the ship) was in port conducting ammunition on-load, so I was able to FaceTime in for the delivery. We did not have the best connection, but it was still a special moment,” he added.

He also spoke about his ties with his Igbo roots, which he said informed the decision to name their daughter Kamara. He now joins the list of other US naval officers making Nigeria proud, including Victor Agunbiade, the navy reserve supply officer honoured in July 2020 for “100 percent accountability” as well as Beauty McGowan, who received a ‘high-performing sailor’ award while serving on the USS Iwo Jima, a US navy assault ship.

Man found hanging in front of shop in Delta