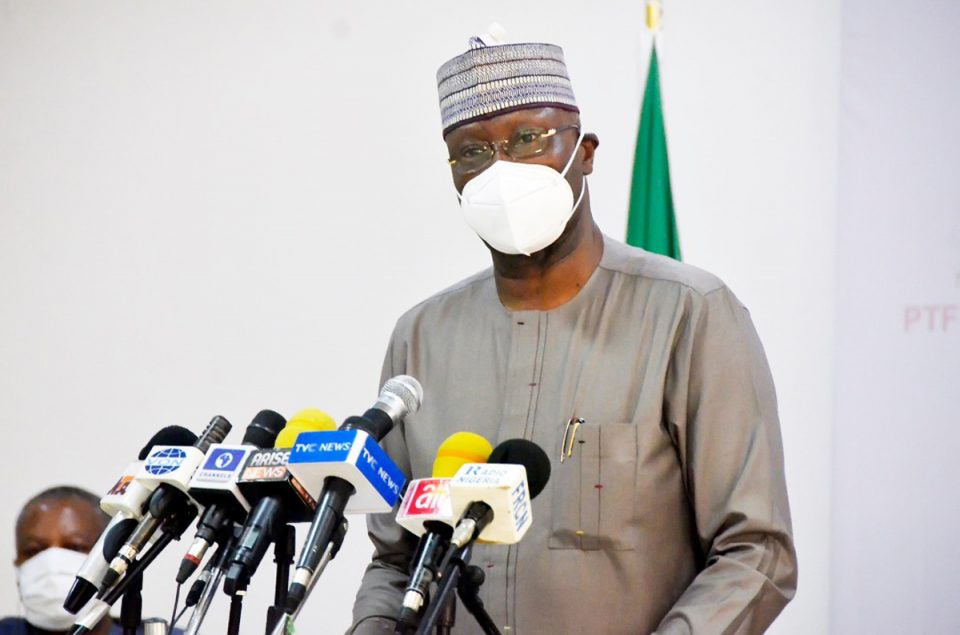 Amid fears of the third wave of the COVID-19 pandemic following the confirmation of the Delta variant of the coronavirus, the Presidential Steering Committee on COVID-19 under the Office of the Secretary to the Government of the Federation has placed six states and the Federal Capital Territory on red alert.

A statement signed by the Secretary to the Government of the Federation/Chairman, Presidential Steering Committee on COVID-19, Boss Mustapha, on Saturday, however, warned other states of the federation to increase their level of preparedness and continue to enforce all protocols to guard against the spread of the coronavirus.

Mustapha also cautioned Nigerians to be mindful of the likelihood of the wider spread of the coronavirus as the they celebrate Eid-el-Kabir on Tuesday and Wednesday.

The SGF also said the government would sustain the current restrictive measures against travellers from countries including India, Brazil, Turkey and South Africa.

The statement read, “Following the confirmation of the Delta variant of COVID-19 and the rising number of infections and hospitalisations in the country, the Presidential Steering Committee on COVID-19 (PSC) has put six states and the Federal Capital Territory on red alert as part of the preventive measures against a third wave of the pandemic. The states are Lagos, Oyo, Rivers, Kaduna, Kano, Plateau, and the FCT.

“The PSC, however, warns that all states of the federation should heighten their state of preparedness and continue to enforce all protocols put in place, given the renowned greater ease of spread of the Delta variant. These steps are critical as we begin to see worrisome early signs of increasing cases in Nigeria.

“The PSC shall continue to minimise the risk of importation of variants of concern into the country by strengthening surveillance at all Points of Entry, enforcing extant quarantine  protocols and sustaining the current restrictive measures against travellers arriving from India, Brazil, Turkey and South Africa.

“The PSC felicitates with the Muslim Ummah on the occasion of the Eid-el-Kabir celebration. It, however, urges all state governments and religious leaders to be mindful of the potential for wider spread of the virus during large gatherings.”

For Muslims celebrating the Eid-el-Kabir, the PSC recommended the decentralisation of Eid prayer to neighbourhood Friday prayer (outdoor), suspension of Durbar activities, and limitation on all indoor gatherings.

The Nigeria Centre for Disease Control had on July 8 said it had detected a confirmed case with the SARS-CoV-2 Delta variant, also known as lineage B.1.617.2 in a traveller to Nigeria, while following the routine travel test required of all international travellers and genomic sequencing at the NCDC National Reference Laboratory, Abuja.

The World Health Organisation’s Regional Director for Africa, Matshidiso Moeti, during a virtual press briefing on July 1, said, “The speed and scale of Africa’s third wave is like nothing we’ve seen before. The rampant spread of more contagious variants pushes the threat to Africa up to a whole new level.

“More transmission means more serious illness and more deaths so everyone must act now and boost prevention measures to stop an emergency becoming a tragedy.”

Meanwhile, the Director-General of the Nigeria Centre for Disease Control, Dr ChIkwe Ihekweazu, has warned Nigeria against a false sense of the eradication of COVID-19 in the country.

Ihekweazu said this on Saturday in Abuja at a webinar for the National Youth Service Corps 2021 Batch B members.

The programme was tagged: “Protecting the health of the Nigerian youth – sustaining safe NYSC orientation camps.”

The programme was initiated to provide enlightenment on the measures put in place to ensure safe reopening of NYSC orientation camps.

The NCDC boss called for collaboration with corps members to ensure sustenance of the measures across the country.

He said, “The mistake we can all make is to think the COVID-19 virus has gone away. Corps members have to work collaboratively with us to sustain the goals we have made in mitigating the risk of transmission in orientation camps.”

Meanwhile, the agency also explained how prospective members of the NYSC can access the COVID-19 case investigation form on its dashboard.

The Federal Capital Terriory Administration has issued guidelines for Eid-al-Kabir prayer and celebrations in the territory.

A statement issued by Mr Anthony Ogunleye,  the Chief Press Secretary to the FCT Minister, Malam Muhammad Bello, on Saturday in Abuja.

The statement explained that the guidelines were reached at a meeting of the FCT Emergency Operations Committee on COVID-19, chaired by the minister.

It stated that the meeting reviewed the current situation of the COVID-19 pandemic in the FCT especially as it relates to the upcoming Sallah celebrations.

According to the statement, the meeting noted the increase in the number of COVID-19 cases in the country and the FCT and the possibility of a third wave and sought for ways to curtail its spread.

“Thus, guided by the advice of the health professionals, the following guidelines are hereby issued for the upcoming Eid-El-Kabir celebrations in the FCT; all Eid prayers in the FCT are to be held in the open spaces at Jumma’at mosques as well as the national Eid ground.”

This is based on medical advice that it is safer to hold large gatherings in open air spaces than in enclosed structures.”

All open Eid grounds should have multiple entry and exit points with hand washing and temperature checking facilities.”

The statement noted that holding capacity of Eid grounds should be reduced to 50 per cent to ensure physical and social distancing.

It said that imams should ensure that sermons were short, adding that Eid prayers should not exceed one hour.

It added, ”All parks and recreational grounds and facilities shall remain closed throughout the festive period.”

Worshippers are enjoined to adhere to all prescribed non-pharmaceutical preventive measures of facial coverings, constant hand washing and physical distancing.”

The Director-General, Nigerian Institute of Medical Research, Prof. Babatunde Salako, has said that the recent increase in COVID-19 cases could be a signal of a third wave of the pandemic.

The Lagos State Government had on July 11 expressed concern over the increasing number of cases in the state and hinted that there was a potential third wave in Lagos.

Salako also told NAN that necessary effort should be put in place to prepare the country against any eventuality.

He said, “We are beginning to see an increase in the rate of positive results in Lagos and that should be a signal that we are entering the third wave.

“I will not say we have entered yet but it is an opportunity for us to prepare because a lot of Nigerians have let down their guard and no longer comply with all the COVID-19 guidelines.”

According to him, there is noticeable increase in the number of cases in the testing centres.

“Five weeks ago, we saw one or two positive cases per day in over 200 samples tested per week, two weeks ago it jumped into 13 and the following week it increased to 30.

“We don’t want to have the kind of experience countries like India are going through, so it is not only in the hand of the government alone but also in the hands of the people to do the needful,” he said.

Salako said that the Delta variant was known to be more deadly and caused more infections and transmit from people to people faster than other variants.

“The nature of the COVID-19, Delta variant, is that it infects  people easily and with that knowledge, we should preempt that.

“We must also get our isolation centres ready and there should be retraining of staff in getting ready for a likely third wave.

“More importantly, we should expedite the process of the purchase of our vaccine to vaccinate a large majority of Nigerians and I am aware that the government is doing a lot about that,” he said.

A virologist and a medical doctor have warned on the dangers of citizens disregarding COVID-19 protocol, saying the nation could pay high prices for such negligence.

They spoke against the backdrop of thousands of inbound travellers shunning testing and isolation.

The Chairman of the National Association of Resident Doctors, Dr Uyilawa Okhuaihesuyi and Chairman, Expert Review Committee on COVID-19, Oyewale Tomori, who spoke to Sunday PUNCH, advised the Federal Government to urgently sensitise the public on the looming COVID-19 third wave.

Okhuaihesuyi said “In Nigeria, as it stands, we have churches, mosques and people who organise parties. You see lots of people who have abandoned safe precautions and public health measures put in place by the government.

“There is so much distrust in the system to the extent that people don’t even believe there is COVID-19; you talk to them about the disease and they just brush it aside. Talking to them about the Delta variant is more like talking about a theory to them. We have seen what happened in India, we saw thousands of people dying every day.

“But as it stands in Nigeria, everybody has thrown caution into the air, nobody is listening, no one cares. As an association and affiliate of the NMA, we lost a member recently to COVID-19.

“The population generally is exposed to COVID-19 and many of Nigerians are not taking it seriously maybe because of the mild effects. As it stands, we can only advise the government to do more media sensitisation and let them (Nigerians) know the implications. Health workers who are taking cautions are still getting exposed to death. So, the government needs to orientate Nigerians.”

Corroborating his view, Tomori lamented at the rate Nigerians had abandoned public health, saying, “We monitored what happened in India, they used to be the best as far as curbing the disease but the moment they threw caution to the wind, they were not testing, there were campaigns, festivals, before you know it, they had the greatest shock.

“The same thing is happening in Nigeria, now that we are still expecting vaccines, we can only hope that people are sensitised and they realise the gravity of what is going on.”