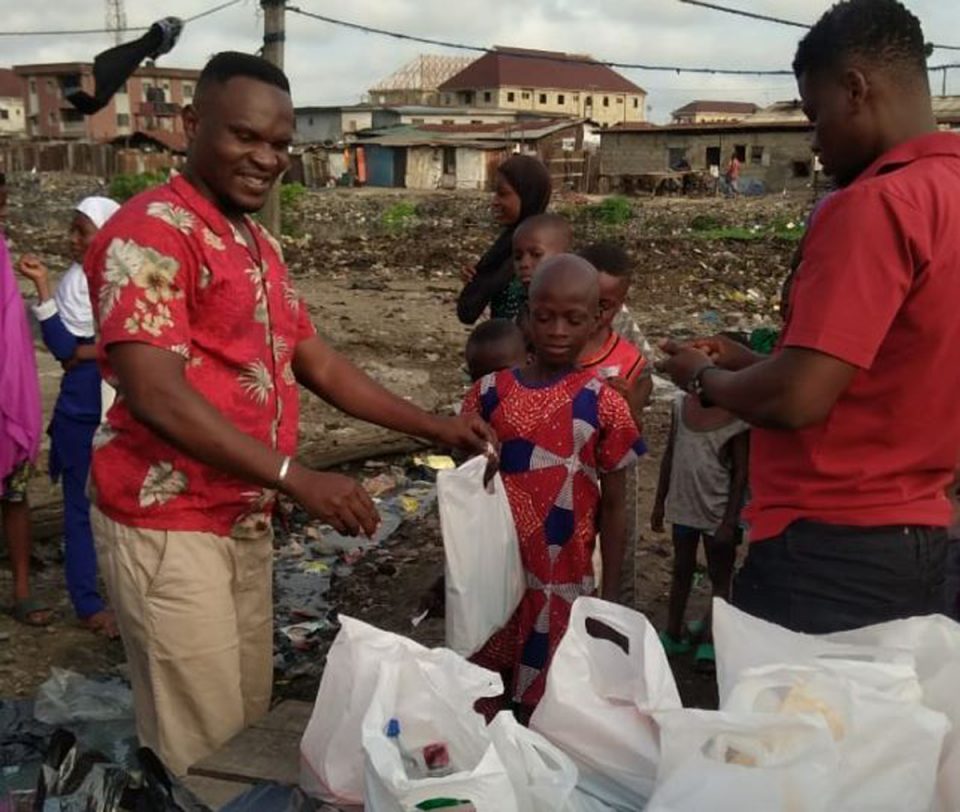 Founder of the foundation, Mr Ezirim Kennedy, said the programme tagged “Feeding the Poor In the Community” was to tackle hunger at the grassroots.

Kennedy added that the foundation deemed it necessary to contribute its quota to the standard of living of underprivileged people in slum communities, thereby, contributing to the realisation of the World Health Organisation’s (WHO) Sustainable Development Goal (SDG) agenda.

“We understand the situation of things in the country now and strongly believe that if we are able to provide food, especially for children in slums, we will help to cut the poverty rate to the barest minimum.

“This will definitely have a positive impact in the lives of children in these communities and put smiles on their faces; their parents will be happy as well, and that is the idea,” he said

According to him, the initiative to extend and bring the outreach to the children of the Ajegunle slum community is borne out of passion and empathy.

“I am a product of such a community.”

“I grew up in a place like this, so I understand, see and feel exactly how it is and what they will be going through in this slum, hence this step is borne out of my life experience.”

Kennedy urged the government, individuals and corporate organisations to identify and support Yagazie Foundation and other NGOs who are into humanitarian programmes to alleviate poverty in the country.

He noted that such support would go a long way to reach out and conquer poverty and hunger, particularly among children living in slum areas.

“The Nigerian ecosystem is very large, and Yagazie Foundation can only do a bit.

“I believe we have other NGOs in Nigeria. So, I’m not just asking for support for only Yagazie Foundation but also soliciting for others.

“Other NGOs who work in this space should also be supported so that they can do exactly or more than what we have done in this Ajegunle slum today.”

He applauded the Lagos Food Bank, British Corner Shop, Drone Nija, Sesa Ecosystem, the Food Bay and individual for supporting the outreach and helping to feed the children.

Mr Innocent Ijroma, the Health Coordinator for Yagazie Foundation, said that the foundation adopted Sports and Education as effective strategies to combat drug abuse among the youths.

“We are concerned about health and wellbeing of the people. Being a pharmacist by profession, my major portfolio is focused on the health aspect of the foundation, as you can see the environment is obviously unhealthy.

“I can imagine the amount of infections that could be transmitted from one person to another here, such as cholera, for instance; this is really a good breeding ground for cholera.

“We are, therefore, calling on the government to look into this environment and do something to bring significant improvement to the living condition because this is not a healthy place to live in”, he said.

Also, Jerry Oboru, Safety  Manager for Yagazie Foundation, expressed gladness for the success of the outreach, adding that the welfare package which contained cooked rice, beverages and snacks went a long way to put smiles on the faces of the recipients.

Fatia Ibrahim, a 13-year-old beneficiary, thanked Yagazie Foundation for reaching out to them in their community and also appealed to the government to come to their aid.

“I thank the Foundation for giving us food, biscuits and drinks today, I am happy with them and they really tried for us, God bless you.

“But I don’t like to live in this place. My dream is to become a nurse, I will like the government to help so that I can live in a better environment and work toward achieving my dream,” she appealed.