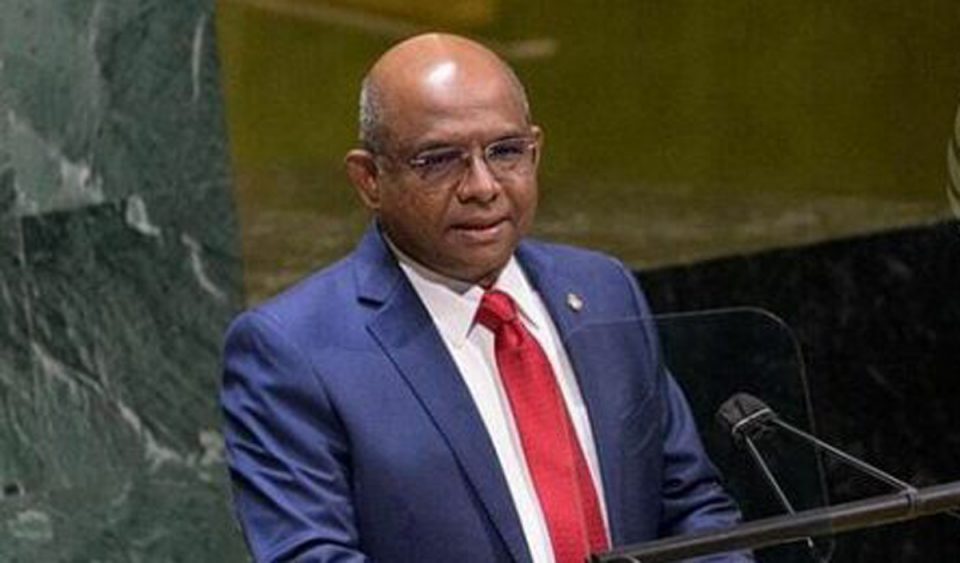 The President of the UN General Assembly, Abdulla Shahid, on Tuesday opened  the 2021 annual General Debate as a hybrid in-person and virtual event, reflecting the darkest days of the COVID-19 pandemic.

The Assembly reflected on the darkest days of the pandemic, “when cities were shuttered and vaccines still a dream” and how the world’s peoples “came together as never before”.

Abdulla Shahid of the Maldives said that after a year and a half of suffering “in silence and in anxiety”, it was hope and a sense of shared humanity that enabled this coming together, adding: “Let us give them hope now”.

He recalled that “in record time”, scientists globally collaborated to develop multiple COVID-19 vaccines and “the largest vaccine roll-out in the history of humankind”, calling it a “monumental” undertaking to “be proud” of.

The Assembly President said that over the next 12-months, the world wants solutions to the collective challenges of “fragility, conflict, COVID-19, and climate change”.

“These issues…keep our citizens awake at night, they fuel a collective anxiety and a worry that things are progressively getting worse,” he said.

“They are not wrong. We can do more”, Shahid added.

On COVID-19, the UN official outlined that the world has vaccines, know-how and distribution capacity, but “we lack only the political support”.

And despite incredible innovations in renewable energy, adaptive technologies, and transitioning away from fossil fuels, he noted, “political support and the related financing” is in short supply on the changing climate.

While highlighting a near-universal desire for nuclear disarmament and non-proliferation, the Assembly President said, “yet we falter at the finish line, leaving treaties unratified”.

Finally, on the humanitarian front, he pointed out that despite a more-than-sufficient supply of food and water in the world, famine and drought hang in the balance.

Pointing out that we are living through a “turning point” moment in time, he said: “We can choose a path of isolationism…mutual destruction…slow retreat of the human experiment, or we can forge together a new path, a sustainable and resilient path that changes the future of our planet”.

While describing the COVID-19 pandemic as “a tragedy of the grandest scale”, he also referred to it as a “canary in the coal mine”, warning of the perils that lie ahead if hard, but necessary, choices were not made.

Shahid cited the power of humanity to overcome challenges and was hopeful “that we can bypass protocols and obstacles to transform our societies”.

To this end, he will host a high-level meeting focusing on practical obstacles around supply, storage, and distribution. And on longer-term COVID-19 recovery, he vowed to push to build back “better, stronger, greener, and bluer”, the UN correspondent, quoted him as saying.

“By following the paths laid out by Agenda 2030 [on sustainable development for all] we can pivot away from destructive practices and embrace a better future,” Shahid said.

The Assembly President spelled out the importance of refocusing attention on the climate crisis, “which has taken a backseat to COVID-19”.

Citing the report of the Intergovernmental Panel on Climate Change (IPCC), he said: “We are no longer on the wrong path… we are on the edge of the cliff”.

To address this, Shahid will host a series of climate action events, beginning with helping to bridge gaps to deliver on climate promises – in the lead-up to November’s UN climate conference (COP26), and later, a “super session on the environment” that encompasses the interlocking issues of the ocean, desertification and biodiversity.

The Assembly President also underscored the importance of continued UN reform and revitalisation, saying “this is not about a balance of power, this is about efficiency”.

“We have never been so technologically advanced…so connected…or had the wealth, the resources, or the know-how that we have now.

“There is nothing in our path to stop us but ourselves. Let us be the UN that people want us to be,” he said.

Ex-CBN chief urges states to be proactive over minimum wage

Reps set for showdown with IGP over detention of lawmaker

Fire destroys property worth millions of naira in Ilorin