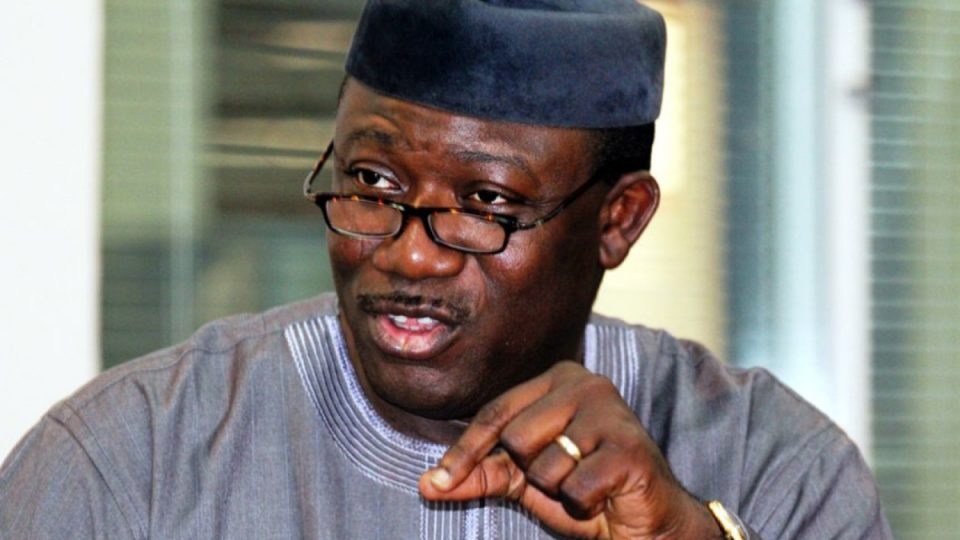 Fayemi made this known on Tuesday in Ibadan, while delivering the seventh lecture series to mark the 2021 annual birthday ceremony of Chief Babatunde Oduyoye, the Special Adviser to Governor Seyi Makinde on Political Affairs.

The theme of the lecture was: “Security and National Unity in Difficult Times”. It was held at theInternational Conference Centre, University of Ibadan.

The NGF chairman said there was no further evidence to prove that Nigerians were all concerned about the security situation “than the fact that security is a major item of discourse in most national gatherings”.

According to him, whether in the Nigeria Governors’ Forum, National Executive Council or National Assembly, media chats, among others, security remains on top of the chart.

Fayemi said that Nigeria had shown a tremendous resilience in confronting these challenges.

The governor of Ekiti said the present situation in the country didn’t warrant politics of blame and opportunistic opposition, but “it is time to build a nation and not to fritter it away”.

He said: “The political class needed to fashion out a new way of communicating their politics beyond the now obnoxious resort to ethnic jingoism, sectarian and divisive rhetoric.

“This nation is in need of patriotic statesmen and women and not rumour mongers, ethnic crisis entrepreneurs, provincial men of little minds who see everything from the prism of ethnic and religious conspiracy.

“It is time we started a new conversation about our national development, peace and prosperity.

“There should be an elite consensus on what is the minimum irreducible and acceptable standard of public conduct, but taking due cognisance that peace can only come on the platter of fairness and justice.”

Fayemi urged the leaders to unite in the face of the evil merchants who have no respect for children, old age, women, clergy or traditional authorities.

“In addition, there are two things that we need to address quickly to bring the current wave of insecurity to a halt.

“We need to have a conversation on how we can recruit a large number of people to join the police and the military, even on a short service or otherwise.

“By available statistics, we need minimum of 200,000 personnel to boost the fighting power of our men.

“This number is very large and a potential financial and logistic nightmare, yet we cannot delay any further.

“The ungoverned spaces needed to be closed up quickly by motivated men with the singular objective to save the nation.

“That takes us to the number two issue of financing and arming large recruitment,” he said.

Fayemi said he believed that one of the cheapest and fastest ways to handle this was to amend the law setting up the Nation Youths Service Corps (NYSC).

“With this, we can use the existing orientation camps to train willing and able graduates to reflate the security personnel under a special arrangement that will be worked out.

“That way, the fund that is currently deployed to the NYSC can be used with just some additional funding, which could be sourced through a national emergency fund for the next five to 10 years.

“Those who cannot join the military services can serve in their community without pay, if we must still retain the NYSC for everyone.

“To incentivise those who may volunteer to serve, they will have a separate certificate and medal of honour in addition to having priority for military, paramilitary and civil or public service recruitment after service.

“We also need to encourage investment in the real sectors that can engage people and reduce unemployment, which is a major source of insecurity,” the NGF chairman said.

Fayemi, however, said he has confidence that though, the situation might look helpless, sooner than later, the security situation would see a significant improvement and that Nigeria would come out stronger from this moment of national distress.

In his remarks, the Co-chairman of the occasion, former Senate President, Sen. Adolphus Wabara, called on the Federal Government to stop what he described as “knee-jerk” approach toward ending insecurity challenges in the country.

Wabara urged the government investigate the cause of insecurity and design solutions needed to tackle the challenges.

He congratulated Oduyoye on his commitment to the country and for showing leadership by instituting the birthday lecture.

Oduyoye, a two-term member of the House of Representatives was a former Minority Whip of the House.