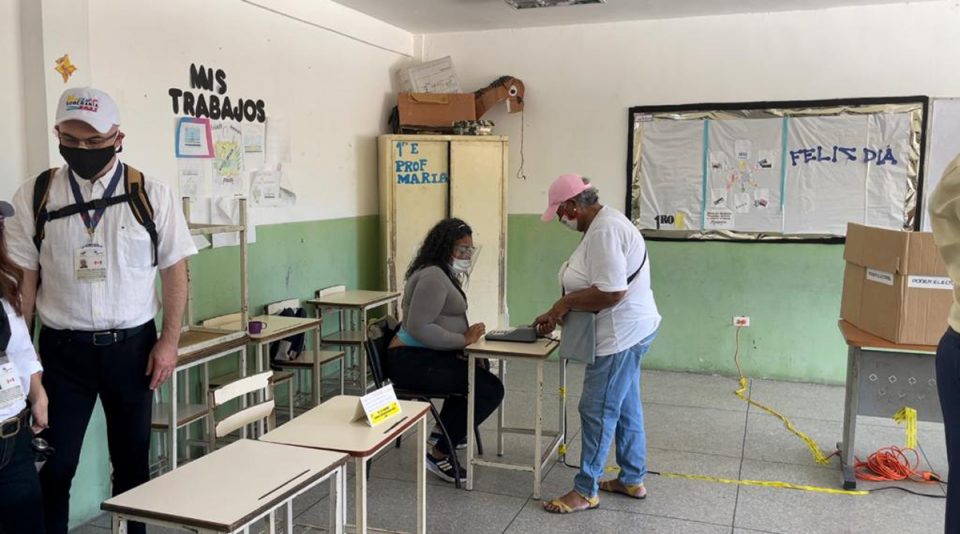 Citizens and political parties of the Bolivarian Republic of Venezuela have commended the peaceful and transparent process of the ongoing regional and municipal elections in the country.

Some citizens and representatives of political parties made this known in separate interviews across several polling units in different municipals of the country.

3,000 persons are contesting for 23 positions of governors and 335 Mayorship positions in the country’s Regional and Municipal Elections.

At the Eugeno de Bellard polling unit of Bolivar Municipal, an electorate l, Babara Miguel, after casting her ballot said she knew that her vote would count because the process was one that they could rely on.

“Since I have been voting, I know my vote has always count and no one from my neighborhood has ever challenged the outcomes of elections because it is a transparent process all through.

“We do not have incidents of any chaos from any groups at the polling units, in fact, it is just like a normal day for us here.

“The police are just here to watch the events but they do not have to intervene in any disputes,” Miguel said.

Herendia said just as the process had been going on smoothly, it was expected that it ended without any hitches also.

“So far, since the beginning of the voting exercise, everything has been going on well.

“We are satisfied with the process and we know it will also end without any sort of problems,” Herendia said.

“There are no interferences at any point and the process has been as transparent and peaceful as expected.

Ms Francis Berroterain, Coordinator of the Center from the National Electoral Council (NEC) said that like previous polls in the country, the process has been very peaceful and smooth.

Berroterain said the country used both the electronic and manual voting systems and the process has been going on without hitches, with a large turnout of voters.

“The Venezuelan elections have always gone smoothly and this one is no exception. Here, we have about 1,300 registered voters and they have been coming one at a time to cast their votes.

“We also have representatives of the political parties who are here to witness the process and sign at the end of the day that they agree with the whole process.

“We also use the electronic machine and the manual system where the results will be compared at the end of the day,” Berroterain said.

Mr Joe Emersherger, an Independent Journalist from Canada also commended the process which he describes as been ultimately credible and transparent.

Emersherger also commended the people for being law abiding.

After visiting several polling units at Zamora, Bolivar, Guatire, and Petare Municipalities, the process has been adjudged to be peaceful and transparent.

Citizens are seen to be going about their normal activities with small businesses opened to service the people.

The old and young persons with disabilities were not let out of the exercise, as they were being guided to cast their ballot.

Dilapidated FG’s assets should be refurbished, not discarded – Oyo-Ita