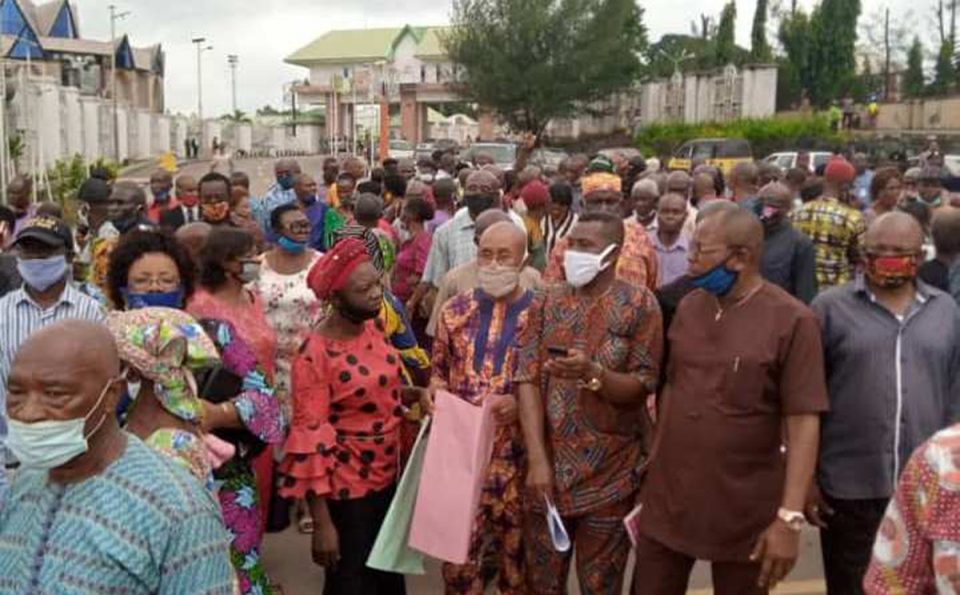 The President, Nigeria Union of Pensioners (NUP), Mr Goodwin Abumisi, on Sunday said Pensioners would embark on mass protests in States that have failed to meet their obligations in pension payments.

Abumisi said this in a message to mark the 2021 Pensioners Day celebration in Abuja, with theme “Enhancement of Pensioners Welfare through Information and Communication Technology”.

He told State Governors that prompt payment of monthly pension to pensioners is a right and not a privilege.

Abumisi urged state governors, nonchalant in paying monthly pensions to pensioners, to have a change of heart and do the needful.

He said that failure to do that, the union would mobilise its members nationwide and match to erring government houses to demand their rights.

“Our major challenges have been with the State Governments, many of whom have become emperors in their various states.

“They govern with iron hands in a democratic setting as ours.

“I wish to place on record that payment of monthly pension to the pensioners is a right not a privilege.

“I use the occasion of this year’s celebration to call on such non challant governors to please, have a change of heart and do the needful, before we march to the erring government houses to demand for our rights,” he said.

Abumisi decried the fact that the constitution did not prescribe any punishment for such erring governors who treat pensioners with disdain.

He appealed to President Muhammadu Buhari to impress it on the governors to stop inhuman treatment of pensioners.

Abumisi said the Federal Government should find a constitutional means of ensuring that various bailouts to the states not paying pensioners were not diverted but are judiciously used to the advantage of the Nigeria workers and pensioners in terms of payment of their salaries, pension and gratuities.

“It is disappointing and painful to note that while the Federal Government has released the enabling circular for the much awaited consequential adjustments of pension, effective from April, 2019 and released funds to that effect, most of the state governments are yet to give effect to the circular as released by the National Salaries, Incomes and Wages Commission. This is unfair to the senior citizens.

“It is time for the governors to act on this matter.

“However, we deeply appreciate and salute the courage and magnanimity of some state governors who have been treating their pensioners with respect and dignity.

“We urge you to please keep it up as God would certainly reward your efforts,” he said.

Abumisi said the Inter-Ministerial Committee set up through the Federal Ministry of Health, in conjunction with the National Health Insurance Scheme (NHIS) and other relevant stakeholders, should urgently address health needs of the elderly.

He said the states should expedite action to complete its assignment and submit its report to enable the Federal Government to urgently provide the health needs of the retirees in particular and the elderly in general.

The NUP boss also commended President Buhari for his effort to improve access to healthcare and promote the wellbeing of the elderly, particularly pensioners through the provision of health insurance scheme.

He said that plans are ongoing to ensure the implementation of the Pension Reviews of 15 per cent, 33 per cent and the consequential adjustment of pension in line with the New National Minimum Wage.

Abumisi said subsequent payment of arrears arising from future pension increase to the contributory pensioners is still left in the cold.

“It is very pertinent for me at this juncture to call on the Federal and State Governments to rise up to the occasion by complying with the constitutional provisions of Sections 173(3) and 210[3) of the 1999 constitution of the Federal Republic of Nigeria.

“This stipulates a five-yearly pension increase for state pensioners or together with any workers salary review, whichever is earlier.

“I wish to passionately urge the Federal and State Governments to diligently comply with these provisions and not to wait until the retirees become frustrated and agitated before the government begins to run helter skelter so as to douse tension and to forestall the breakdown of law and order.

“On the other hand, we expect the National Salaries, Incomes and Wages Commission as the agency established by the Federal Government to review salaries and pensions to be more proactive in this regard,” he said.