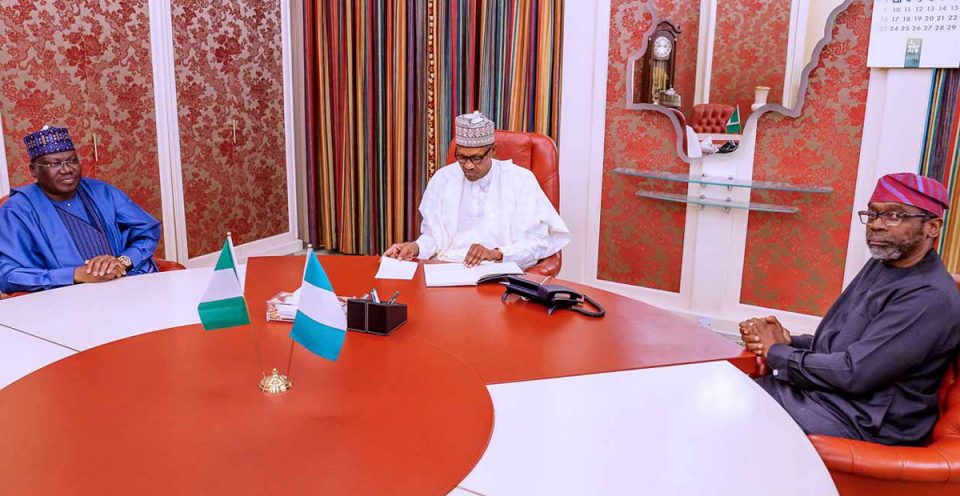 President Muhammadu Buhari has applauded the Ninth National Assembly under the leadership of Senate President, Dr Ahmad Lawan, saying its cooperation with the Executive is not a sign of weakness but strength.

The President stated this in a message delivered by his Chief of Staff, Prof. Ibrahim Gambari at a birthday get-together hosted Wednesday night by the Senate Chief Whip, Senator Orji Uzor Kalu in honour of Lawan who clocked 63.

According to him, contrary to assumption that the role of the legislature is to oppose government, the National Assembly just like the Judiciary are to work in a complimentary manner with the Executive arm.

That means the three arms of government are to work in a complimentary manner. Therefore Mr President view the kind of flare, the commitment, the passion, the constructive engagement with the Executive under his leadership, the cooperation with the Executive as a sign, not of weakness but strength.

“It is easy to be critical. It is easy to be negative but it is a lot more difficult and more challenging to have a constructive engagement and cooperation with the Executive. But the beneficiary of such constructive engagement and cooperation is the nation. One of the achievements is that we now have a budget that runs from January to December and Mr President has just signed the finance bill and budget for 2022. So the President really commends the way in which he handles the affairs of the National Assembly and looks forward to many more periods of cooperation with your leadership.”

Also speaking, the Senate President appealed to politicians irrespective of their political affiliations to work towards building consensus on critical national issues.

According to him, regardless of the party any politician belongs to, there are certain things they cannot afford to do, warning that they can’t be politicians unless there is a country.

Lawan said, “Politicians across board must learn to arrive and achieve and sustain consensus on issues. Our country first. You can’t be President, you can’t be Senator, you can’t be member of House of Representatives, you can’t be Governor, you can’t be anything unless there is a country. So we must build and sustain a consensus on certain fundamental issues about our country, irreduceable minimum below which nobody should go. Whether you are PDP or APC or APGA or whatever you are, because that will infringe on the very fabric of our country. So it is very important that we achieve that. Democratic countries elsewhere that are successful have largely achieved those kind of consensus.

“I’m taking the opportunity today to appeal to all of us, politicians across the country, across board, to work for our country to achieve consensus on certain fundamental issues. Our people look up to us. They do what we give them education to do. Sometime they go beyond what we think they will do. At times, it becomes much more costly to deal with the consequences or repercussions. I advise that we should build consensus. In the Senate, we have been able to achieve some kind of formidable unity and consensus on what we must do for our country. We believe that this country can only be better if political leaders decide to do the right thing. Regardless of our political affiliations, in the ninth Senate, we have always approached issues mainly in national interest”.

No specific date for resumption of international flights – NAMA