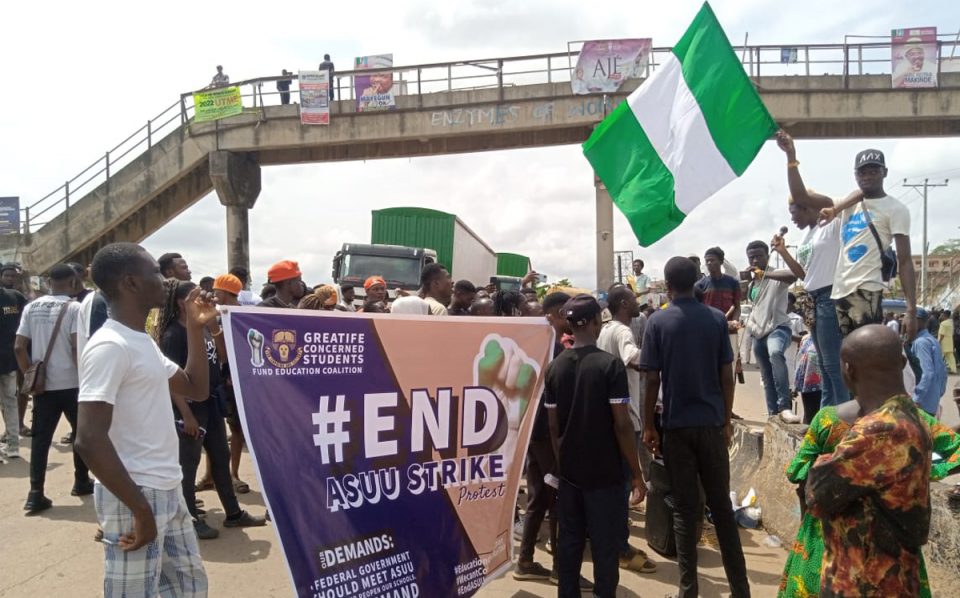 Men of the Nigeria Police Force had militarised the venue of the protesting students of Obafemi Awolowo University, Ile-Ife, Osun State.

The protest which began with barely a hundred students on Thursday morning had since grown into a mass movement on the Ife-Ibadan expressway.

One of the students who spoke with our correspondent, Testimony Jesutofunmi, said, “we are using this opportunity to send a message to the Federal Government that they should value our education over elections.

“These people enjoyed free education but they don’t want to give us. They keep wasting our time. Our house rent keeps wasting. People that are selling something on campus can’t survive. The bus drivers cannot make income, and a lot of people are affected.

“We are using this opportunity to say no to ASUU strike, we want FG to settle ASUU’s demands, that is all we are saying.

“End ASUU strike, fund education, we don’t want this kind of education, where we spend extended years for a four-year course.”

Another student, Omowumi Abraham, said, “we are in this together, everybody, all concerned Nigerians should join us.”

I stepped on powerful toes –Magu

Foreign exchange inflows fell to $5.52bn in May