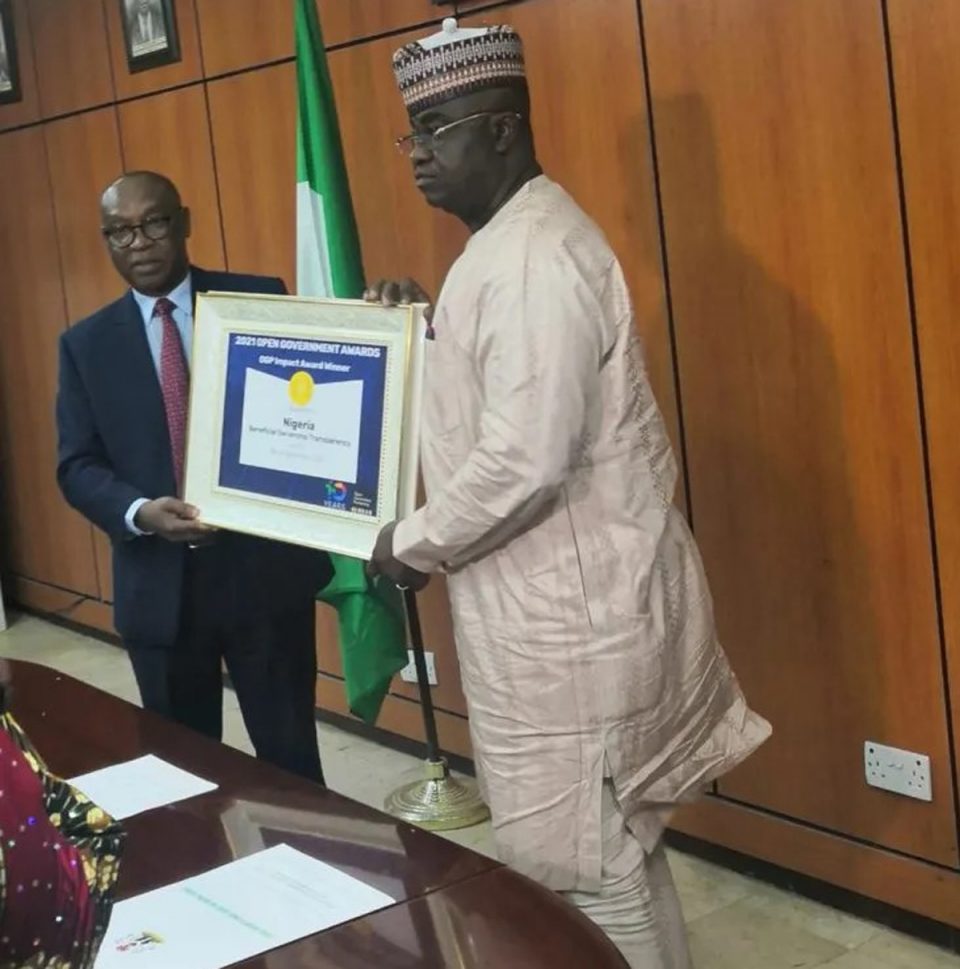 The award was won during the last Global Summit of OGP member countries held in Seoul, South Korea.

Dr Orji Ogbonnaya Orji, Executive Secretary, NEITI, made the presentation to President Buhari, through the Minister of State, Finance, Budget and National Planning, Prince Clem Agba, at the Ministry, in Abuja.

The presentation was part of the activities to commemorate the OGP week in Nigeria.

The OGP adopts a multi-stakeholder and co-creation approach that brings together government and civil society actors to address governance problems.

Receiving the award on behalf of the President, the minister said it did not come as a surprise that Nigeria beat the whole world to clinch the award at Seoul, the South Korean capital.

Agba said the present administration had made laudable achievements despite depleted revenues.

He said these include the Second Niger Bridge, nearing completion, the development of rail infrastructure and Oweto Bridge, among others.

The minister, who is also the National Co-Chair of Public Sector OGP, however, regretted that Nigerians only saw what was not being done and dwelt on them.

“Out of 79 member-countries of OGP, only 10 country Heads of States were invited and chosen based on the world perception of their seriousness in fighting corruption.

“Nigeria was among the 10. We are happy that the presentation we made at the event was considered the best, which has resulted in what we are celebrating today,” he said.

He recalled that in May 2016, the President made the commitment at the Anti-corruption summit in London where Nigeria signed into the OGP.

Agba encouraged stakeholders to redouble their efforts towards delivering on the presidential declaration on OGP and to expect more awards in the course of implementing it.

“The OGP process under my watch will continue to deepen good governance using instrumentality of the OGP,” the minister said.

Giving insight into the significance of the award, the NEITI Executive Secretary, said Nigeria beat other countries in Africa and the Middle East that were implementing the OGP and emerged top for the honor.

This, he said was followed by the independent review of reforms embarked upon among implementing countries.

He said the review tracked and assessed milestones achieved by the Nigerian government in setting up a Beneficial Ownership Registry to end anonymous companies in the country.

Orji highlighted areas of similarities and convergence between the Extractive Industries Transparency Initiative (EITI) and the OGP and how they have contributed to OGP implementation in Nigeria and delivered on common objectives.

“Nigeria is implementing both the EITI and OGP – two global multi-stakeholders governance initiatives that share core similarities and commitments to deliver on transparency and open governance in members’ countries.

“While NEITI implements the EITI, the Nigerian OGP Secretariat implements the OGP. There exists a longstanding and strong working relationship between the two initiatives,” he said.

According to him, the EITI is a multi-stakeholder initiative that brings together government, civil society and companies to address problems in the oil, gas and mining sectors.

He said commitments on fiscal transparency, beneficial ownership and contract disclosures were core obligations for Nigeria as a signatory and member of the global EITI and OGP community.

He said NEITI was therefore working closely with OGP Secretariat to deliver on these commitments.

Obanikoro has not stepped down and ‘ll not – Campaign organisation

With Less Production, Ratio of Nigerians Per Barrel of Oil Increases from 79 to 118

Rivers may lock down Bonny Island