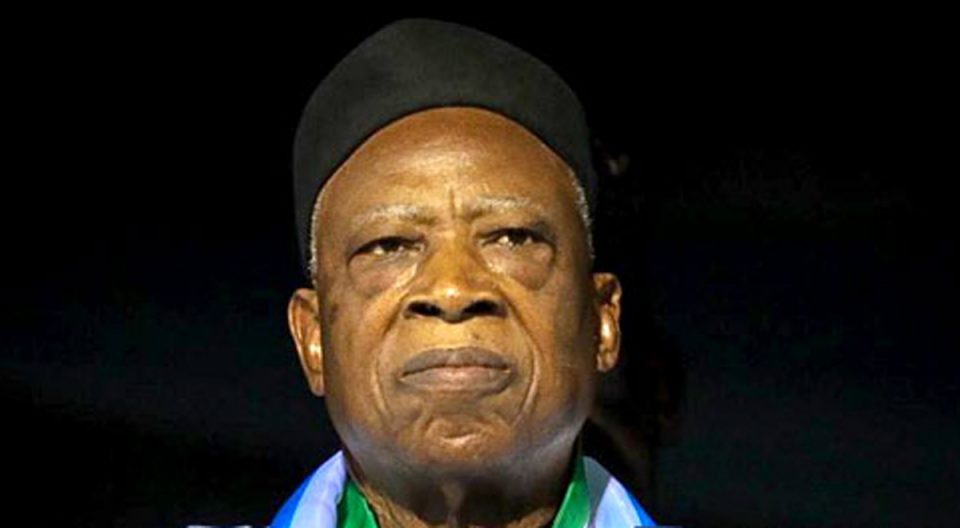 The All Progressives Congress (APC) yesterday rose in stout defence of its all Muslim presidential ticket saying it signposts positive development for Nigeria.This was just as the party also announced the Governor of Plateau state and Chairman of Northern Governors (NGF), Simon Lalong and Minister of State for Labour and Employment, Festus Keyamo as the Director General and Acting Spokesman of Bola Tinubu Presidential Campaign Organisation respectively.

Speaking with newsmen after a close-door meeting with President Muhammadu Buhari at the State House, Abuja, APC Chairman, Senator Abdullahi Adamu, described the party’s same faith ticket as a “positive development” for the country’s politics.

Adamu, who was flanked at the briefing by APC presidential candidate, Mr. Bola Tinubu, his running mate, Senator Kashim Shettima and Governor Lalong, stressed that the dust raised by the same faith ticket would be settled before the February, 2023 presidential poll.Tinubu’s choice of running mate in July, this year had attracted criticisms across the country especially from the leadership of the Christian Association of Nigeria (CAN).

Several groups, religious and civil society organisations had argued that floating a Muslim-Muslim ticket does not reflect the country’s religious diversity.However, commenting on the issue yesterday, the APC Chairman said despite the concerns raised, there were those who see a same-faith ticket as a positive development for the country’s politics.

“Yes, we have been hearing concerns being expressed. In the APC, we believe very strongly, that no matter what description, no matter what faith you will associate with any one of our candidates, we are first and foremost Nigerians.

“There is no doubt in the fact that we have people who stock trade on some of these religious issues. Just like you have people expressing fears, or concerns about a Muslim-Muslim ticket, there are Christians that welcome it as a positive development, in Nigerian politics. They are Nigerians,” he added.

Adamu also assured that the party recognised the concerns, saying the party would, “put them to rest” before the election which is seven months away.  He said: “We are extremely sensitive to some of these sensitivities of fellow Nigerians or fellow members of our party. But the fact of the matter is, one issue does not determine a candidate or determine victory.

“The party has taken a very careful deep look at the Nigerian situation and the political space. And we believe very strongly that notwithstanding the expression that we’re hearing, we will be working on amicable solutions to the sentiment and we’re very sure by the grace of God we’ll put them to rest before the elections.”

On the purpose of their visit to the President, the APC Chairman announced the party’s choice of Lalong as DG of its Presidential Campaign Organisation saying the APC settled for Lalong because of his “ability”.

Adamu said, “We are here today to see Mr. President Muhammadu Buhari to brief him and to get his buy-in and approval of plans that we are having regarding our campaign outfits. So, we’re on the same page with Mr. President regarding our organogram and the individuals that are going to be playing different roles within the organisation structure in the campaign outfits.

“The person who is going to be the DG the Director-General of the APC presidential campaign organisation is Governor Simon Lalong of Plateau State. He will lead the campaign.“We have a campaign spokesperson in the person of Hon Festus Keyamo. Now, there would be a deputy in his office. The deputy spokesperson will be Barrister Hannatu Musawa.”

“Second, I’m not only the Governor of Plateau, I’m chairman of the Northern Governors’ Forum. So I am able to carry out leadership in any capacity. I only want to express to you that I am surprised that I’m being announced now. I am sure we’ll not disappoint you.”

On his part, Tinubu’s running mate, Shettima, claimed that the same-faith arguments were machinations of a petrified opposition.Citing the Ribadu-Bafarawa same faith presidential ticket of the Action Congress of Nigerian in the 2011 general elections, the former Governor of Borno state advised Nigerians to focus on issues and not the faith of the candidates.

According to the serving Senator: “In 2011, the presidential candidate and the vice-presidential candidate of the ACN. Both of them were Muslims. Nobody raised an eyebrow. Now, the opposition have seen a winning combination and they are petrified, deep down to the marrow of their bones.“We will not trade in insults, lies and mischief. We have established a track record of excellence. Let our opponents show what they have done in their respective states.

He also asked opposition parties’ candidates to make public the number of people they mentored in the course of their political career.Shettima recalled that Tinubu, since his time as Governor of Lagos State from 1999 to 2007 had mentored a lot of politicians currently doing well in the nation’s political space.

“Asiwaju has mentored a lot of people right from Vice President to Works Minister and several governors and ministers.  He mentored all of them,” he said.He, therefore, asked the opposition candidates to, “tell us who they have mentored in the country.”“So, we are waiting to hear or see the list of people they have mentored,” the vice presidential candidate further said.