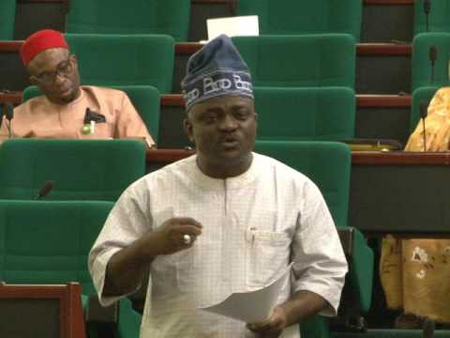 Members of the House of Representatives have called on stakeholders of the University of Lagos to work in harmony and respect constituted authorities, to take the institution to the next level.

The Chairman, House of Representatives Committee on Public Procurement, Mr Oluwole Oke, gave the charge while fielding questions from newsmen on Saturday.

He spoke at the end a two-day visit by an eight-man committee led by him to the institution in Lagos, as part of its oversight function.

According to him, the visit is necessary, following the recent crisis between the institution’s management and the Pro-Chancellor, Dr Wale Babalakin.

The News Agency of Nigeria (NAN) reports that the crisis started following claims that the Pro -Chancellor had ordered the Registrar of the University, Mr Oladejo Azeez, to issue queries to key management staff, including the immediate-past Vice Chancellor, Prof. Rahamon Bello and his successor, Prof. Oluwatoyin Ogundipe, among others.

The queries were said to border on financial improprieties, travelling without permission and other issues, a situation that did not to down well with management.

Oke said, “We the members of the Committee on Public Procurement of the House of Representatives are here on a fact finding mission, which is part of our oversight function.

“The fact remains that we are here pursuant of the resolution of the house, mandating us to investigate the alleged infractions of provisions of Public Procurement Act of 2007 and other financial issues.

“We invited the stakeholders, as even though the regulators, that is, National Universities Commission (NUC) and the Federal Ministry of Education have already taken steps to resolve the issue, we took the allegations of the Pro Chancellor, Dr Wale Babalakin as weighty and so felt that we should investigate his claims, and this is exactly what brought us here.

“However, part of the things we have so far established is that there was no clear understanding of the functions of both the university management and council.

“Having said this however, we have drawn the attention of the council to the Provisions of Section 20 of the Procurement Act that it is only the accounting officer of this university, or any university, which is this Vice Chancellor, that has the mandate to manage, supervise as well as ensure compliance, the provision procurement Act.

“That has been stated clearly and I am very happy there are legal luminaries on the board of the council.

“Therefore, the accounting officer of this university, in the person of the vice chancellor takes charge of all the tender boards.

“The same section 20 made it very clear that it shall be immaterial, whether he has delegated a person or group of persons to carry out one function or the other.
.
“That in case of any of infraction, he shall be personally liable, and we have drawn his attention to this same provision that henceforth, he should take charge of this.”

The chairman also said that should anything go wrong, government would prosecute him.

He said that it was the duty of the vice chancellor to chair or nominate someone to represent him on the biard of the Procurement Planning Committee (PPC), as stated under section 21.

According to him, from the allegations by the Pro chancellor over the new university library still under construction, whereby a part of it caved in, sometime in April, the committee members have been to the site to carry out an on the spot assessment and summon the contractor.

He said that the consultant that the institution engaged to manage the project had been asked to make his presentation unfailingly before 12 noon of Monday, May 27.

Oke said that the consultants are supposed to be seen as professiioals and therefore must be mindful of the future of those who will make use of such projects, who are majorly the students.

“We do not want a situtation where we think it is safe to continue with the project only for something else to happen after completion, even while these students are making use of the place.

“So, we owe the students the duty of care, and do not forget that the function of government is to ensure the security and welfare of the citizens of this great country.

“We are mindful of all these and we have invited all the concerned contractors and consultants over to Abuja on Monday so that we can form our opinion and table our report latest by Tuesday, May 28 before the parliament,” he said.

Earlier, the committee, which had visited key projects (completed and ongoing) on campus expressed satisfaction at what was on ground.

According to the chairman, Unilag remains a brand, and from the presentation of management, the institution has remained on course and is doing a lot.

He stated that the university had attracted support from members of organised private sector as well as the international community, with the students doing well locally and in the diaspora.

“That is why we are calling on the pro chancellor and the management not to allow their differences drag the name of this great institution to the mud.

“We do not want the trust and confidence of Nigerians in this university to be eroded,” he added.

During the course of the meeting with stakehokders, Oke had advised the Vice Chancellor to be in control of his duties.

He charged Ogundipe not to allow any one to upsurp his powers.

“I am saying this so that you know your responsibilities.

” It is your duty to chair or nominate someone to represent you on the board of the Procurement Planning Committee (PPC) and the function of the committee is very clear under Section 16.

“The only job of the council members is to recieve reports from you,” he told vice chancellor.

The chairman had announced at the commencement of the meeting that the Pro Chancellor had written to excuse himself from the proceedings, as he was out of the country.

TBI Africa quoted NAN reports that the Prof Boniface Oye-Adeniran represented members of the Senate-in-Council among other council members.

The visiting members of the House of Representatives Committee on Public Procurement consisted of Mr Oluwole Oke, the chairman; Gabriel Onyenwife and Sam Onuigbo, among others.

The Vice chancellor of the University, Prof. Oluwatoyin Ogundipe, and members of his management team, including the Registrar were all in attendance.