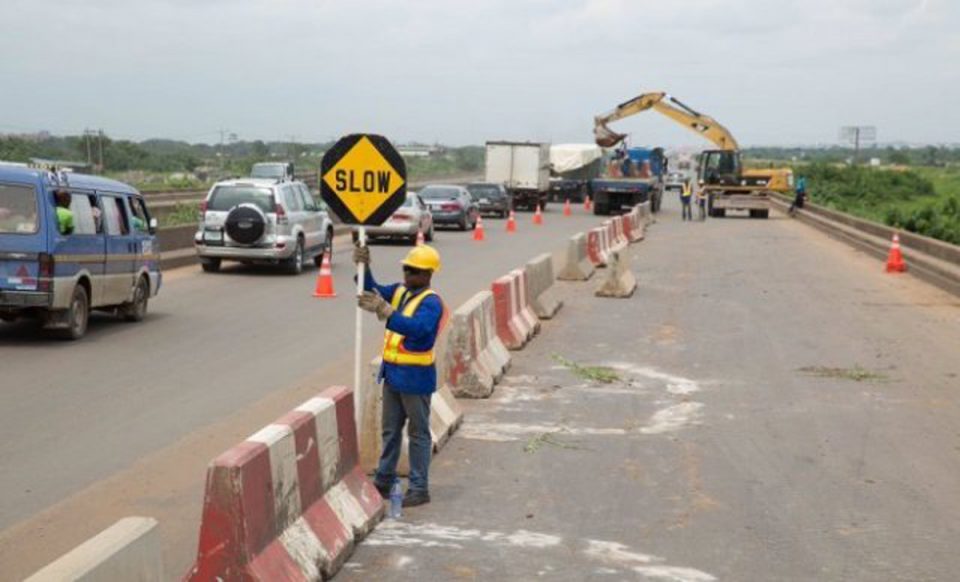 The Federal Road Safety Corps (FRSC), Ogun State Command has disclosed on Sunday that, there would be temporary closure of the inward Lagos traffic along Ibadan-Lagos Expressway to enable the construction company, Julius Berger Nigeria PLC effect the rehabilitation of the road.

The Route Commander and   Public Education Officer, of the Command Florence Okpe made this known on Sunday in a statement, adding that the rehabilitation work would initially affect 600 meters of the corridor.

‘This is to bring to the attention of the   Motoring Public, that in view of  the ongoing road rehabilitation work on the Lagos – Ibadan Expressway, the construction company, Julius Berger Nigeria PLC has notified the Corps of extension of rehabilitation work on the Expressway from  around Berger to KARA bridge  (otherwise known as Ogun river bridge, around the Kara  cattle market ) on the Lagos   – Ibadan section of the Expressway, covering  1.4 kilometers ,  commencing from Saturday 03 August 2019’.

‘The rehabilitation work which would initially affect 600 meters of the corridor would cause the temporary closure of the inward Lagos traffic , to enable the construction company effect the  rehabilitation of the road and temporary diversion of traffic that would transfer the Lagos inbound traffic to the same  carriageway conveying traffic outward Lagos, thereby making both the  traffic inward and outward Lagos accommodated on the same  section of the Expressway’.

The agency called on, motorists to note this occurrence and plan their trips by allowing more time to their traveling time, in view of the construction work that would narrow the carriage way which may impair motorisation.

‘The general public ,especially motorists are advised to use alternative corridors like the Epe/Ajah  – Ijebu – Ode ; Lagos – Ota – Itori – Abeokuta, and  Ikorodu – Sagamu as alternative routes to access Lagos’ ,the statement explained.

The Sector Commander Clement Oladele has accordingly advised motorists to bear with the travel inconveniences during this rehabilitation period of the aforementioned sections of the Expressway.

‘Motorists are also enjoined to cooperate with the FRSC patrol teams and sister traffic and emergency agencies that will be strategically deployed to control the diverted traffic, around the rehabilitation sections’.

‘In addition to advising Motorists to increase the time of their travelling period when using this corridor during this period of the rehabilitation, motorists  are further reminded to  drive within the maximum speed limit of 50km per hour , prescribed by the National Road Traffic Regulations, 2012,  as the maximum speed at construction zones’, the statement emphasised.