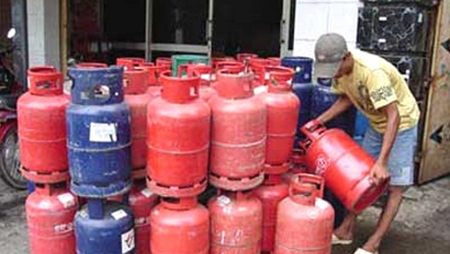 Some cooking gas marketers have appealed to the Nigerian Liquefied Natural Gas (NLNG) to supply gas to other coastal terminals outside Lagos to reduce the inherent pressure on the terminals in the South West.

The marketers made the appeal in separate interviews with TBI Africahe  in Lagos on Sunday.

The marketers said that it became necessary against the back drop of the indiscriminate hike in the price of cooking gas.

It would be recalled that marketers of Liquefied Petroleum Gas (LPG), under the aegis of Nigerian Association of Liquefied Petroleum Gas Marketers (NALPGNANAM) on Nov. 7 raised alarm over indiscriminate hike in the price of gas by 75 per cent in the last two weeks.
Its Executive Secretary, Mr Bassey Essien, said that the price of a 20 metric tonnes of LPG which sold between N3.15 and N3.5 million suddenly moved to N 4.2 million.

Mr Azubuike Offor, the Managing Director, Chizufek Nigeria Ltd., said there is need for NLNG to increase the frequency with which its vessels delver LPG from Bonny to the terminals.
Offor urged the management of NLNG to deploy vessels of smaller capacities to access the coastal terminals if product availability must be achieved,
He said that NLNG could also help by increasing the supply to the Nigerian market and making sure that there was no gap in its supply
According to him, one of the major implications on the ongoing hike in cooking gas is that it makes rubbish of all the efforts by the government in deepening the use of gas in the country.
Offor said that was because a lot of people would not be able to buy the product because of the high cost.
He noted that the government removed Value Added Tax (VAT) to help reduce the price of gas.
“ The current hike has reflected negatively on the price as 12.5kg now sell between N4,000 and N4.500 in Abuja and will probably get to N5,000 by Monday morning
“This recent hike will have a huge adverse effect on the economy as a lot of gas plants that do not have a enough capital to trade with will be forced to close shop and a lot of employees will be downsized leading to unemployment.
“I believe that the lasting solution to this problem is for NLNG to increase its domestic supply to the country since what we are told is that this hike is a result of the law of supply and demand.`
“ Government can also help by updating the facilities in the ports for easier discharge of LPG at the ports.
“The ports in the eastern zones should be brought to par because it does not make sense that the vessel will load in Bonny, bring it to Lagos and trucks will come to Lagos and take the product back to the east,’’ he said.
Mr Okenwa Chinonso, the Managing Director, Nokson Gases Company Ltd., said that the only lasting solution to the incessant increases was a streamlined industry.
This, he explained wiuld be with a level playing field where NLNG and other domestic sources would be able to deliver enough gas to all the terminals at a fair price and a steady schedule.
Chinonso said that the laws of demand and supply would bring down the prices, adding that NLNG should be applauded for the role they have played in growing the industry.
He said that when President Obasanjo mandated the LPG exporter to dedicate a specific volume for the domestic market, only NLNG provided a route to market, adding that Chevron and Mobil should be compelled to also set aside an appreciable volume from Escravos and other channels.
“According to him, a domestic price that covers the cost of production and profit for the producers should be fixed by the producers and gas should stop being priced on an international pricing benchmark for a product produced and consumed locally.
“Prices should not rise for us because it is winter abroad and demand abroad rises and more volume of LPG needs to be allocated to the local market
“NLNG should work out modalities for supplying the depots(Warri, Oghara, Port Harcourt and Calabar) outside Lagos with product even if it requires a mother vessel that loads at bonny, and a smaller daughter vessel that loads from it and drops at the smaller depots outside Lagos due to their draft issues that prevent bigger vessels from coming there,’’ he said.

The marketer said that the implication of the hike of cooking gas to the poor Nigerians was that at a time, many had switched and were switching from kerosene due to its high cost and to gas.
He said that an increase in gas prices would impoverish the masses and cause them to switch to firewood and charcoal, but stressed that was not what was needed by Nigerians because of the attendant harm those fuels cause on the health, desertification and climate change.
Chinonso said: It’s effects on the local market can be up to N5000 or N6000 per 12.5 as against the previous price of N3000 to N3500 per 12.5 kg cylinder of gas.
“The implication of the hike on the economy will be a reduction in the purchasing power of the masses, increased health care costs from the adverse health effects of using dirty fuels.
“Job losses in gas plants who suffer reduced patronage and an unpredictable market place, capital flight due to importation of gas etc, he added.
Similarly, Mrs Tina Abazie, the General Manager Allied Gas Ltd., Ogba said that the price hike would simply mean a lot of our consumers would find it very difficult to buy cooking gas and would likely resort to a more readily available and cheaper source of energy, thereby inflicting more hardship to the common man.
Abazie said that the recent hike from the terminal means that customers that must use cooking gas would be forced to part with as much as N6,000 for a 12.5kg cylinder of gas refill.
She said that the implication mean a drawback on the government’s plan of wanting to deepen or promote the use of LPG as the safest and cleanest form of energy in the country today.
She said that priority should always be given to LPG and not just other petroleum products at all our terminals, while adequate infrastructures should be put in place to reduce unnecessary bottlenecks at the various terminals.
Abazie advised NLNG to flood the market with enough to meet our growing demand.
“ This story of demand being more than supply is not palatable to hear at all. If NLNG are having challenges to meet supply then they should let us know.
“ This is definitely killing our businesses and the last thing our economy needs right now, She said.
However, one of the terminal operators who preferred not to be mentioned told TBI Africa in confidence that the one of the major reason for the hike was the VAT introduced by Federal Government on Imported gas .
The source said that inability of NLNG to meet up marketer demand, some terminal operators sort importation from outside the country which was not vated before now.
The operator said also that diversion of gas supply to the new terminal in Port Harcourt also contributed to the ongoing hike in the country.
The terminal source said that in ensuring adequate supply across the country by NLNG, they delivered simultaneously to Port Harcourt twice without supply to Western region which create gap.
The source also said that currently LPG is scarce, adding that there is no LPG in the terminal to suppl marketers.
The source, however, said that its hopeful that between Nov. 12 and Nov. 23 NLNG vessel is excepted to deliver gas in Lagos.