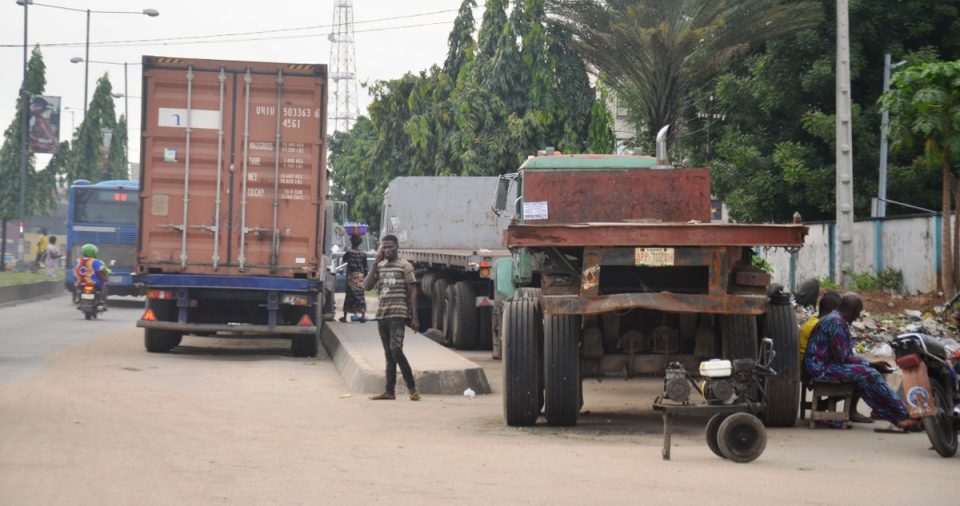 Authorities of the Iponri Police Station on the Lagos Mainland have continued their illegal parking of seized articulated trucks at the Iponri Bus Stop, in spite of persistent outcries of motorists and road users.

Four months ago, other agencies, including the Federal Road Safety Corps and the Lagos State Traffic Management Agency (LASTMA) swiftly removed trucks impounded by them and left on the road to block traffic at the Iponri area.

Authorities at the Iponri Police Station have, however, remained adamant, leaving impounded trucks at the bus stop and causing nightmares for motorists on the Costain-Iponri axis of the busy Funsho Williams highway.

The Divisional Police Officer of the Iponri Police Station, whose name was given simply as Mr Ogunlaja was furious when correspondents  took him up on why the impounded trucks were being left at the bus stop after the seizure of the trucks by the police.

“You’re asking me why the trailers are being parked here. Is it your job to be looking into this kind of matter,’’ the visibly angry Ogunlaja asked, when he was told that it was wrong to leave the trucks on the highway.

Many months after, the illegal parking of the trucks at the bus stop has continued from day to day, checks by our correspondents showed.

But the spokesman of the Lagos State Police Command, Mr Bala Elkanah, has promised that he would get in touch with the authorities at the Iponri Police Command, to prevail on them to desist from parking the impounded trucks on the highway.

He said that the command had earlier warned police commands to desist from parking impounded vehicles at wrong places, especially on highways in the Lagos metropolis.

The entire bus stop and some sections of the road have been taken over by impounded trucks, causing serious problems for motorists plying on the road.

The leaving of the seized trucks on the roads has choked the Costain area, where construction work is currently going on, causing traffic bottlenecks in the Iganmu area.

Some motorists plying the area, who spoke on the illegal parking of the seized trucks, complained that the development had betrayed the smart city dream of the Lagos State Government.

“We live in a state where anything goes and law enforcement agents just do things anyhow. How on earth can impounded trucks be parked at bus stops and on bridges?,’’ cleric Dada Williams asked.

“Most of the trucks you see here have been here for months and no one is talking. Does it mean those that should call people to order are not aware or they just decided to keep quiet.

“Any driver that wants to park at Iponri Bus Stop now cannot do so because it is already taken over by impounded trucks. Commercial drivers now drop and pick passengers on the middle of the road, thereby increasing gridlock.

“Why are our law-enforcement agents so lawless and yet so mean on people breaking the law?’’

Another motorist, who identified himself simply as Mr Patrick, also decried the parking of seized trucks at the Iponri Bus Stop.

He described the abandoned trucks at Iponri Bus Stop as an eye-sore, appealing to the State Government to do the needful with the year coming to an end.

A businessman, Mr Kayode Ojo, who plies the Costain-Iganmu road corridor regularly, said that there was need to remove impounded vehicles from the area to ease traffic.

An auditor, Mr Ayobami Adesina, commended traffic management officers for their efforts to ease traffic on Lagos roads but wondered why they would be allowing seized trucks to be left on the roads, instead of the premises of the agencies that seized the vehicles.

Adesina argued that instead of dropping impounded vehicles at bus stops, such vehicles should be taken to places to be designated by the authorities.

LASTMA has not been able to remove scores of articulated vehicles dumped at the Iponri Bus Stop, many years after the vehicles were impounded by the agency.

NSE: Crucial indices down by 0.10% as profit taking persists

Collapse of Oil Price: FG crashes price of PMS to N125 per litre