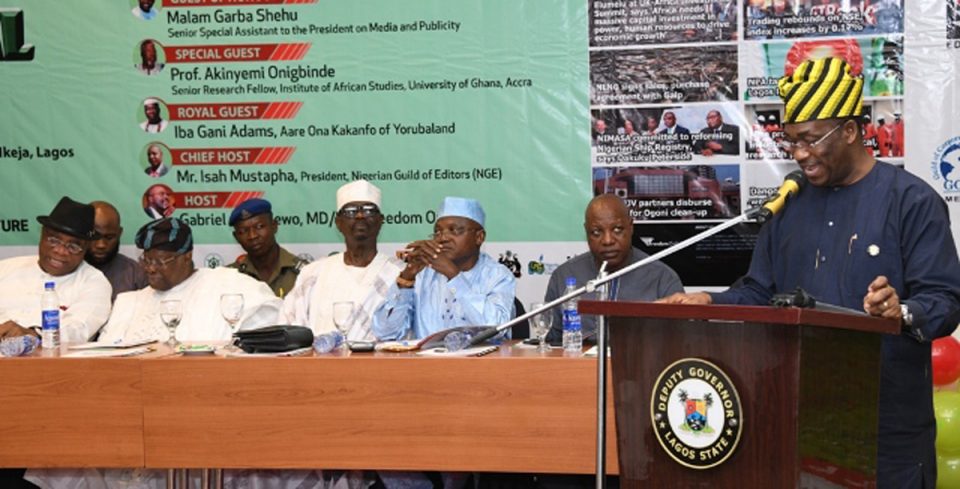 A former Deputy National Chairman of the Peoples Democratic Party (PDP), Chief Olabode George has called on Nigerians to see themselves as one and work assiduously to address national challenges.

George made the call on Tuesday while speaking at the 3rd Freedom Online Annual Lecture in Lagos .

The theme of the lecture was “Nigeria: Foundation, Fundamentals, Future.”

George said the challenges confronting the country required that all citizens work together with a common purpose to address them.

He said tribalism, sectionalism, religious bigotry and others were an albatross to national development, urging citizens to shun them.

The PDP chieftain further urged Nigerians to strive to build an ideal nation that would promote the well-being of the present generation and even posterity.

“A nation is not a mere conglomeration of a space and a people. It is more.

“It is the effortless summation of a common dream, of common truth,  of common objectives, and of agreed realities.

“A nation is the spontaneous voiding of parochial limitations. It is the deliberate eclipsing of ethnic or sectarian articulations.

“It is to reside in a unifying universe where growth is measured by hardwork and merit, where human enhancement is predicated on demonstrated rallying virtues of leadership, of strength of character, of dedication to duty and repose in honour.

“We must re-assess and boldly confront what is wrong with the national architecture.

”We must work together to identify and rectify the variegated ills and the wrongs presently subsisting,” he said.

George said the country must take the bold step to ensure devolution of power to guarantee sustainable development.

According to him , the country cannot meet the development aspirations of the people with a too strong centre and weak states.

He said the states and even the local governments had to be more empowered to bring about development.

The PDP chieftain urged Nigerians to demonstrate patriotic zeal in all they were doing, saying citizens must believe in the country even in the face of challenges.

He commended the publisher of FreedomOnline, Mr Gabriel Akinadewo for organising the lecture, saying the lecture had provided a platform to proffer solutions to national challenges.

Also speaking, Gov. Babajide Sanwoolu of Lagos State called on Nigerians to do their best toward nation-building.

Represented by his deputy, Dr Obafemi Hamzat, Sanwoolu said the country would be great if everyone contributed their quota to the development of Nigeria .

e said the recent immigration visa ban by the United States on Nigeria might be a blessing in disguise as it would enable citizens to stay at home to fix the problems in the country.

The governor described the present generation of Nigerians as extremely talented and creative, saying that they could help reposition the country if they gave their best.

Sanwoolu commended President Muhammadu Buhari for the revolution of his administration in the agricultural sector, saying the Federal Government’s renewed investment in agriculture had greatly helped in promoting food security.

Malam Garba Shehu, Senior Special Assistant to the President on Media and Publicity in his speech, urged Nigerians not to give ethnic or religious colouration to the security challenges.

He urged citizens to see criminals as criminals, irrespective of where they were from.

Shehu said the Federal Government was doing everything possible to provide adequate security for all Nigerians.

He called for more funding for police, saying inadequate funding had hampered their capabilities to provide security.

Squatters under Eko Disco ROW to be ejected