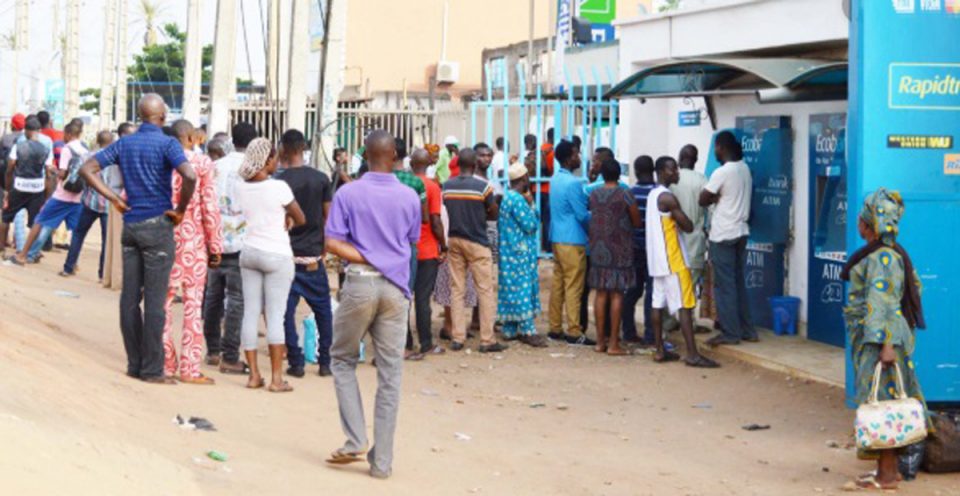 Some banks within Ibadan metropolis, on Monday, witnessed a surge in the number of their customers, as they embarked on skeletal services after closing many of their branches.

A correspondent who went round the city, reports that the banks did not deliberately lock out their customers but were just trying to enforce the social distancing preventive measure.

Banks visited around Mokola, Dugbe, Queen Cinema, Sango, Bodija and Agodi Secretariat, had most of their customers outside their banking halls, waiting to be called in for their transactions.

Some of the bank officials, who spoke on condition of anonymity, said banks were applying different methods to comply with the safety protocols to combat the spread of COVID-19.

A staffer of First Bank Plc said that the branch received directives to engage in skeletal operations.

“Some of our branches are closed while some members of staff were asked to go on compulsory leave.

“It will be good if the Oyo state government will enforce border closure and lock down because of the influx of people from other states,” the source said.

A staffer of Polaris Bank also said that only the regional office of the bank at Secretariat and some few other branches at Oba Adebimpe road and Idi-Ape were opened to customers.

“We were doing shift routine jobs before most of the branches were shut down, effective from March 30.

“The number of staff at branches that are open has been reduced in line with the directive from the headquarters.

“The cash officers will, however, load the ATM machines to ensure that they are running. There will always be money to withdraw for Nigerians,” the source assured.

Also, another bank staffer attributed the long queues in some banks, especially at ATM points, to the skeletal services being provided by the banks.

“People who want to withdraw money over the counter can’t do so now. They may have to transfer to those who have ATM cards to withdraw.

“Even the few banks that open allow customers in batches, like five people at a time, to ensure social distancing and they sanitise their hands before entering the banking halls,” said the source.

Meanwhile, a bank customer, Blessing Aroloye,said that it was encouraging to see banks adhering to safety protocols in view of the COVID-19 pandemic.

“Taking all the necessary measures now is crucial, though it comes with some discomforts, as time and energy are spent,” he said.

Another customer, Michael Adegbola, said it was only at a few ATM points that social distancing was observed.

“We just hope this will end soon, as things are not the same again. Many people now live in fear,” he said.

Meanwhile, a visit to some malls within the metropolis revealed that the rush usual rush had significantly reduced.

Workers in some of the malls, such as FOODCo, Feedwell Supermaket, Shoprite, among others were seen putting hand sanitisers on people’s palms as they entered to do their shopping.