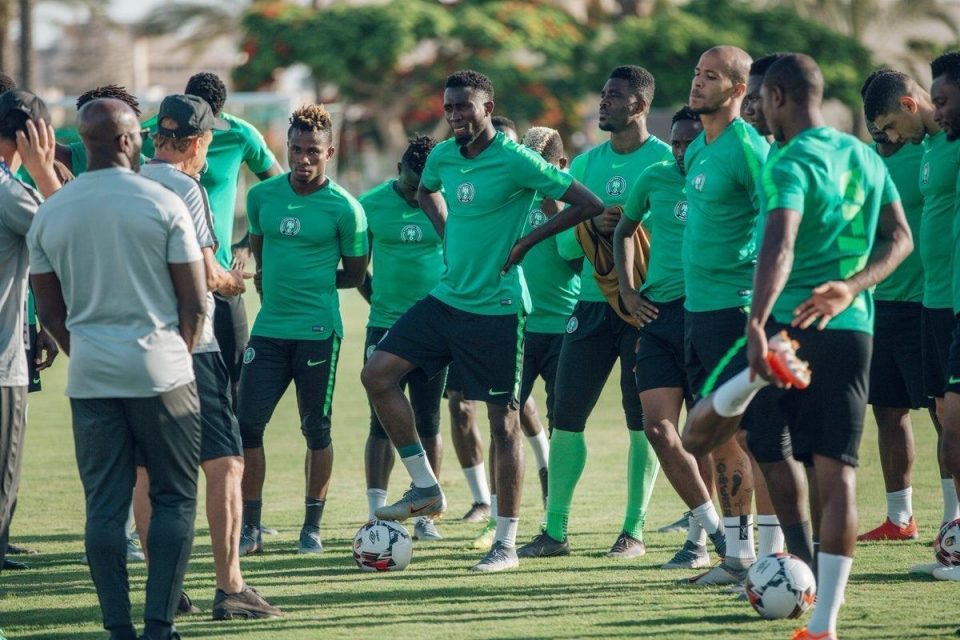 The Super Eagles are just a step away from qualification for the 2021 Africa Cup of Nations (AFCON) and will be looking to pick all three points on Saturday.

When they take on the Republic of Benin, as much as they are hopeful however, their opponents might prove hard nuts to crack, given their recent performances.

The leaders Nigeria square off against the Squirrels at Porto-Novo’s Stade Charles de Gaulle in one of the Day 5 games.

The 2021 AFCON qualification series had in one of the earlier fixtures between both teams, in November 2019, seen the Squirrels shocking the Eagles.

They led with a goal inside the first five minutes at the Godswill Akpabio Stadium in Uyo.

However, goals by Victor Osimhen and Samuel Kalu earned the Eagles all the points at stake.

Nigeria followed up with a 4-2 defeat of Lesotho in Maseru four days later to fly to the top of the pool.

But draws in their home and away duels with Sierra Leone a year later prolonged celebrations of qualification.

The Super Eagles are clear favorites in the head-to-head duel having won 12, lost one and drawn one out of the 15 games played by both teams.

But the Squirrels are currently in fine form and have a full squad for the encounter.

Michel Dussuyer’s men are on a five-game unbeaten run, having last tasted defeat against the Super Eagles in their first AFCON qualifying game in November 2019.

Their home form has also been spectacular, given they have not lost for eight years, having last tasted defeat against Algeria in 2013.

The Squirrels’ last outing at AFCON was during the 2019 edition where they crashed out of the quarter-final after a 1-0 defeat to Senegal.

The Squirrels currently occupy the second spot in Group L having accrued seven points from four matches played so far.

A positive result in both games will see the West African country reach the biennial African football showpiece for the fifth time.

Interestingly, all the players invited by coach Michel Dussuyer are foreign-based professionals, while captain Stephan Sessegnon, Olivier Gerdon and Rudy Gestede were omitted from the team.

Sessegnon remains without a club since the end of his spell at Turkish Super Lig outfit Genclerbirligi.

However, the 36-year-old will be in the Squirrels’ camp as a non-playing skipper to boost the morale of his teammates.

Technical Adviser Gernot Rohr has also called up a lot of his foreign-based players in his squad and talked of the importance of rediscovering winning mentality.

He said this was needed to go into the FIFA World Cup qualifying battles.

Rohr will be counting on the likes of the in-form Villarreal winger Samuel Chukwueze and Galatasaray’s Henry Onyekuru.

They are to produce the needed firepower on the wings and supply goals for Napoli’s Osimhen and Genk’s forward Paul Onuachu.

Highly-rated Wilfred Ndidi and Etebo Oghenekaro will provide the needed support in the midfield.

The likes of William Ekong, Olaoluwa Aina, Chidozie Awaziem, Leon Balogun and Zaidu Sanusi are expected to inspire the team from the defence.

The team also received a big boost ahead of the clash following the arrival of Leicester City striker Kelechi Iheanacho on Wednesday.

The former Manchester City prodigy —— who has been in terrific form recently —— bagged a double and an assist recently.

That was when Brendan Rodgers’ Foxes secured a 3-1 victory over Manchester United in Sunday’s FA Cup last eight fixture at the King Power Stadium.

In the process, the Nigerian became one of only two players —— along with Manchester City’s Sergio Aguero —— to score 20 or more goals in England’s Cup competitions over the last six years.

For context, only Aguero —- with 21 goals —- has scored more during that period in the FA Cup and the League Cup.

Iheanacho has also had a direct hand in 15 goals in his 15 starts across all competitions this season.

He has found the back of the net in each of his last four games, including a hat-trick against Sheffield United.

Nigeria lead Group L of the qualifiers with eight points from four games and victory over Benin or Lesotho will seal their place at the 2021 AFCON, scheduled for Cameroon.

The three-time African champions finished third at the last edition of the AFCON tournament in Egypt, behind winners Algeria and Senegal.

Sierra Leone, with three points, are scheduled to commence Saturday’s action hwith bottom-placed Lesotho at 3 p.m., and Nigeria are up against Benin from 6 p.m.

This means the match in southern Africa would have ended before the group leaders take to the pitch.

A draw in Maseru sends Nigeria through to the finals in Cameroon, but team captain Ahmed Musa has said they were not interested in the encounter in Maseru.

He was quoted as saying they would rather concentrate on achieving a double over the Squirrels.

It is therefore hoped that the players at Rohr’s disposal will produce a spectacular performance to guarantee Nigeria’s 19th appearance at the AFCON.

The Super Eagles will take on Lesotho in their final qualifying game on Tuesday at the Teslim Balogun Stadium in Lagos.

Against COVID-19 Pandemic in Nigeria