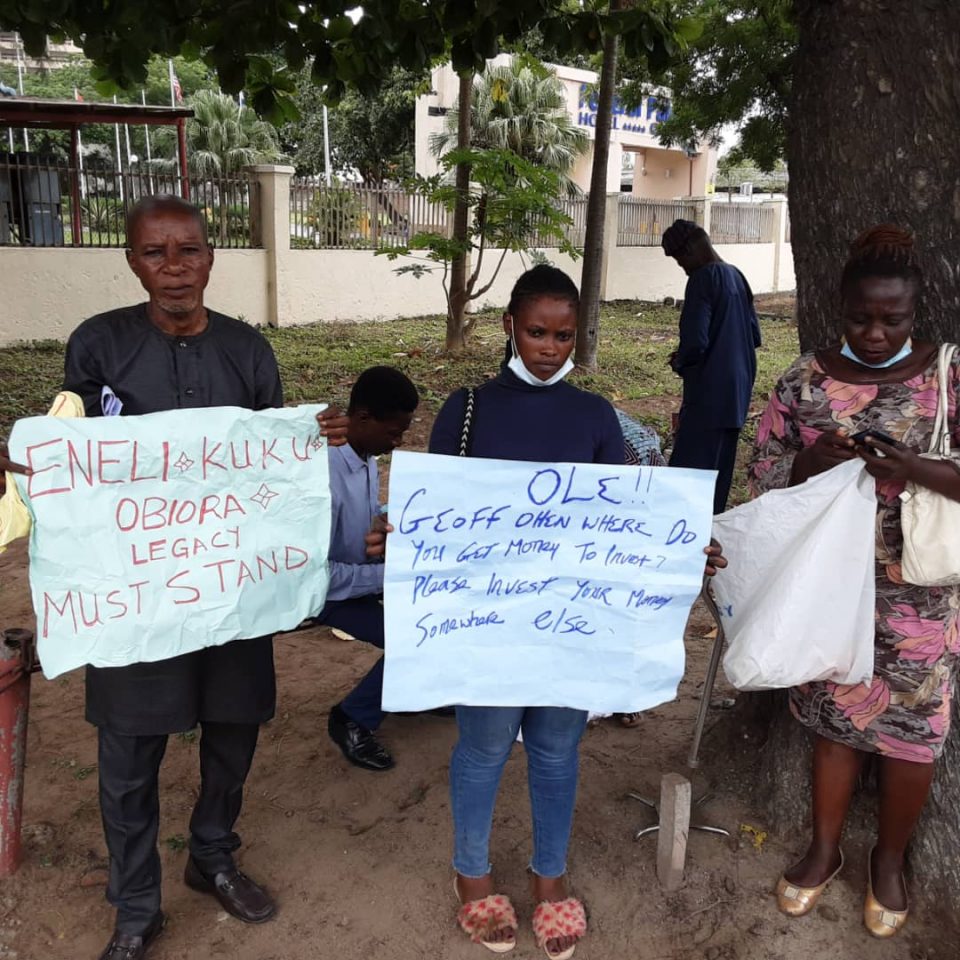 Some shareholders of Ekocorps Plc, owners of Eko Hospital on Thursday stages a peaceful protest at the Federal Palace Hotel, venue of the Extra-Ordinary General Meeting (EMG), citing disenfranchisement of stakeholders and founders.

Recalled that the battle for the soul of Eko Hospital has been ongoing for sometime with some board of directors and management fighting to take ownership of the company from the founders.

It would be recalled that the Court-ordered EGM was to resolve the crisis facing the management board especially the legality or otherwise of the 110million private placement which had been causing the crises in the company.

The protesting shareholders stormed the venue with placards with inscriptions ‘ Geoff Ohen Where do you get money to invest? Please invest your money somewhere else’ ‘Eneli, Kuku, Obiora Legacy Must Stand’ among others.

They said that the EGM was an illegal meeting with the intention to formalise the purported taken over of the hospital management by some shareholders and board of directors.

Speaking with newsmen, Mr Oladimeji Adeleke, a shareholder and representative of the Dedicated Shareholders Association of Nigeira (DSAN), described the EGM as a show of shame as a good number of shareholders were disenfranchised from participating in the meeting.

Adeleke specifically mentioned that 14.5 per cent sharesholdings of late Dr Eneli, one of the founding fathers of Ekocorps and his Estate which were deliberately blocked out from participating in the voting on the legality or otherwise of the 110 million private placement.

According to him, if majority of shareholders, especially those belonging to late Eneli were not disenfranchised of their voting rights, the outcome of the EGM would have been different.

He said: “Today’s EGM is not a meeting but a coup against Nigerian shareholders. We can see that the meeting has been stage managed to favour some board of directors.

“This is a big slap on Nigerians’ face, it shows that the board and management of Ekocoorps have taken us for a ride. It is a daylight robbery.

“We could see that there is a board crises. The full directors are not present either by person, proxy or virtual. We can see that some founding members of the company are not also present.

“We can see that some set of people want to hijack what they didn’t work for and want to take over the company from the real owners. We are here to make our intention known in a peaceful protest.

“As Shareholders we were not allowed into the EGM on the ground that the meeting was for a selected few people and that our names were not on the registered list. I believe our regulators should look into this and do the needful so that justice will prevail.”

He decried police harassment and intimidation when they were ventilating their anger against the disenfranchisement at the venue.

Also, Mrs Efunyemi Ibideyi, a shareholder and National Coordinator, Ark of God Shareholders Association, said that their disenfranchisement from the meeting was delibrate and also denial of their rights.
” I have never seen this type of AGM before. We want our regulators to please look into this. It is like the board of directors are hiding somethings. Eko hospital is dying because of the crises among the board of directors.

“Staff salaries can no longer be paid. We are pensioners, we want to reap from our labour.
“The crisis is really affecting our investment. This meeting is illegal. This meeting cannot stand and all resolutions is null and void,” she said.

Ibideyi urged the relevant regulators to wake up, saying “We want the regulator to help save the masses who invested in the company and those the hospital should be serving.”

Another shareholder, Mr Taiwo Bamgbose, said that it was not rights to sideline any stakeholder of the crisis rocking the firm would be solved.
Bamgbose urged the Nigeria Security Exchange and other regulator of stock market to see reason in persuading the board of directors at the helms of affairs to follow due process.

Meanwhile, the family of one of the founding fathers, Late Dr Alexander Eneli, had written to GTL Registrar and Data Solutions Limited, demanding for registration as holders of the shares of deceased.

In the letter sighted by newsmen, the family stated that the company has for long taken due notice of the transmission of the shares to them in consequence of which one of Uzochukwu ENELI has been appointed director in the place of their late father and has acted as such since 2018.

The family accused some board members of frustrating the exercise of the voting rights of their late father’s shares in order to rig the voting in the EGM in favor of one Geoff Ohen Limited.

The family said that such step was to falsely give Geoff Ohen limited 110 million shares that the courts have since annulled.

Also, the family in a public notice published on Thursday in Guardian Newspaper page 45 notified the public that the company’s shareholdings were bedevilled with several litigations, urging members and shareholders to dissociate from participating in the meeting.