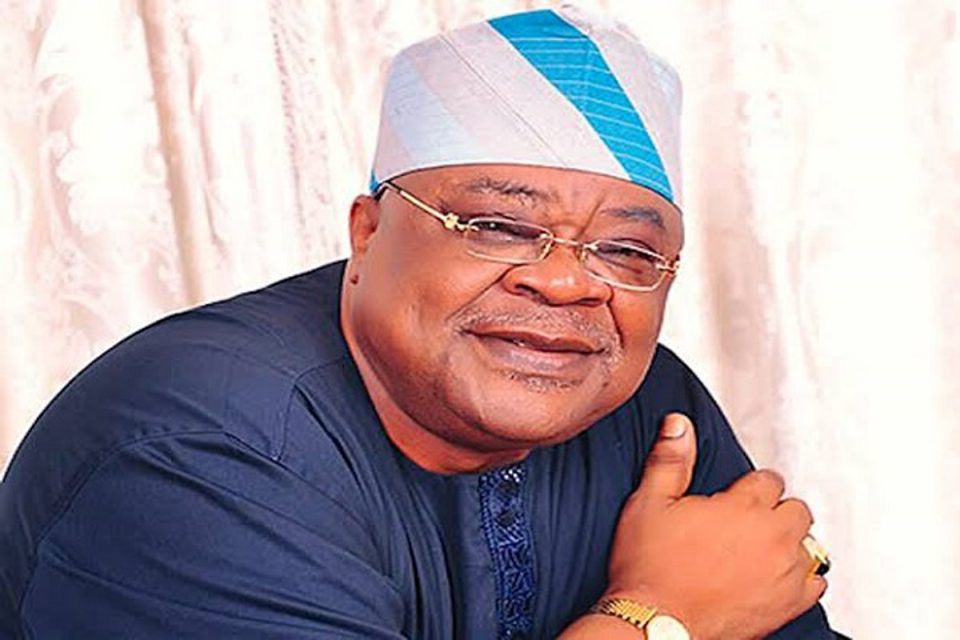 Sen. Kola Balogun, representing Oyo South Senatorial District, has described the death of a former Governor of Oyo State, Chief Adebayo Alao-Akala, as a rude shock and unexpected at this point in time.

Balogun, in a statement by Mr Dapo Falade, his Special Adviser (Media and Publicity), said he was particularly surprised by the sudden passage of the former governor, having been talking on recent developments in the state.

Balogun, who served twice as a Commissioner in the cabinet of the late Alao-Akala, described the deceased as “an astute politician whose friendship cuts all political divides”.

According to him, we have been witnessing many deaths in Oyo State in recent times. But I am particularly shocked by the sudden death of former Gov. Adebayo Alao-Akala.

“His death is a rude shock, because we have been in constant touch very recently and, at each of the time we communicated, he never show any sign of serious ailments.

“I called to condole with him when the Soun of Ogbomoso, Oba Oyewumi Ajagungbade III, passed away. We also spoke on phone last week on the passage of Olubadan of Ibadanland, Oba Saliu Adetunji.

“I also spoke with his wife, Chief (Mrs) Kemi Alao-Akala, who relayed my message to him. In all our conversations, I never got any inkling that Chief Adebayo Alao-Akala will soon leave us.

“I am going to miss him, but we cannot query God on how He does His things. Former Governor Adebayo Alao-Akala has come; he played his part well and he has returned to his creator.

“On behalf of myself, my wife, Mrs Mogbonjubola Kola-Balogun and the entire people of Oyo South Senatorial District, I want to commiserate with the family of the late Chief Adebayo Alao-Akala.

Also, Chief Ademola Ojo, a former Chairman, Association of Local Government of Nigeria (ALGON) in the state, described the death of Alao-Akala as a huge loss.

Ojo, in a statement he personally signed and made available to newsmen on Wednesday in Ibadan, said the country has lost “a super-politician” .

He expressed sadness over Alao-Akala’s demise, describing him as great grassroots leader and enigmatic personality.

The former ALGON chairman expressed appreciation over how greatly the political gladiator impacted his people through his leadership and political life.

“I have personally lost a super-boss. Alao-Akala Akala is one of the greatest politicians to ever come from Oyo State. My political story will never be completed without a bold mention of him.

“Oyo State witnessed unprecedented development under him and the impacts of his administration were really felt down to the local government level.

“As ALGON chairman, I had the cherished privilege to work with a true man of the grassroots in Gov. Alao-Akala,” he said.

According to him, he was a tested and trusted leader. His many legacies in the state will make history kind to him. The state has lost an irreplaceable grassroots politician.

“My sincere condolences to the Alao-Akala Family of Ogbomosoland and the entire people of Oyo State on this great loss.”

Commenting, Mr Hakeem Alao, an APC chieftain, described Alao-Akala as an elder statesman who contributed immensely to the development of the state, saying that the deceased encouraged him to join APC before 2022.

Alao said that Alao-Akala’s wealth of experience, as a politician would be greatly missed by those who had contact with him.

“I received with shock, news of the passage to eternal life of Gov. Adebayo Alao-Akala, the former Governor of Oyo State.

“Gov. Akala lived a fulfilled and exemplary life. His generosity and open mindedness that endeared people to him during his lifetime is unparalleled.

“He will be sorely missed by the people of Oyo State, especially members of the APC.”

The APC chieftain condoled with the immediate family of Alao-Akala, Ogbomoso indigenes and the people of Oyo State.

He prayed that the Lord Almighty be pleased with his soul and protect the family he left behind.

NACCIMA mourns Shonekan, describes him as a leading light of the private sector.

Why Nigeria is facing challenges despite 5% economic growth – Buhari