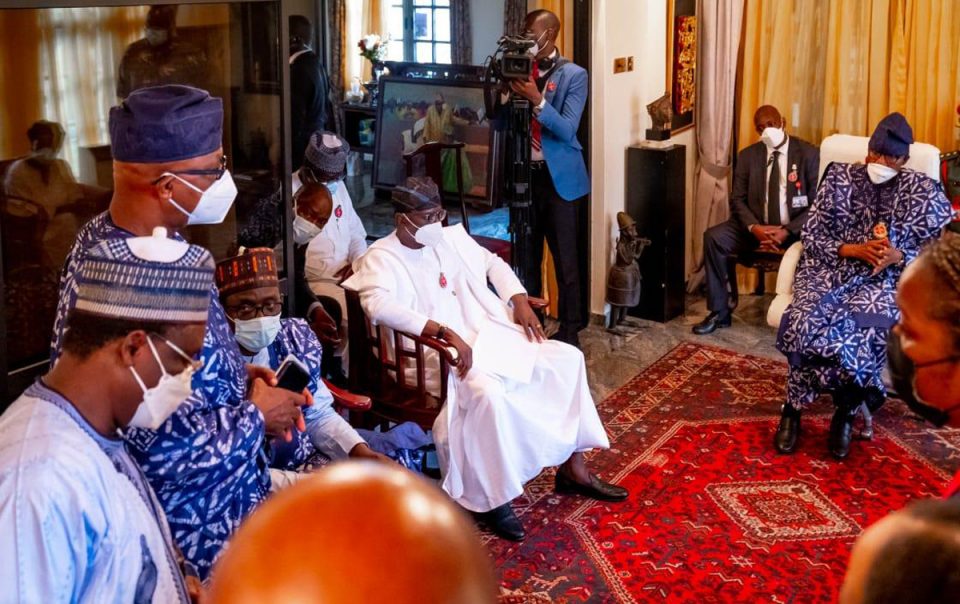 The  President was earlier in Abeokuta in Ogun, for the inauguration of some projects by Gov. Dapo Abiodun.

The President  arrived the Ikoyi residence of Shonekan at 4:40pm with high profile dignitaries and security.

President Buhari was in the company of Gov. Babajide Sanwo-Olu of Lagos State, and his Ogun counterpart,  Mr Dapo Abiodun.

Others were,  Gov. Mai Mala Buni of Yobe and Chairman, APC Caretaker and Extra Ordinary Convention Planning Committee (CECPC) among others.

A correspondent monitoring condolence visits at the residence,  observed heavy presence of security operatives, police , military and Nigeria Security and Civil Defence Corps in and around the premises.

No fewer than 20 patrol vans of police and military police as well as Armoured Personnel Carriers were stationed around the residence at Ikoyi in Lagos.

Meanwhile, the Bobagunwa of Lagos, Chief Akin Disu, who also paid the deceased family a condolence visit, said that the late head of state served the country very well.

Disu, a childhood and school friend of Shonekan, said : “Nigeria begged him to come and serve the country and he did that very well.

“Nigerian leaders should emulate Shonekan,  a life dedicated to public service. He served the country properly and he kept the unity of the nation at the time of heavy distress.”

Shonekan died in Lagos on Tuesday at the age of 85.

The ING was constituted in August 1993 by Babangida in the aftermath of the annulment of the June 12, 1993 presidential election.

Shonekan was, however, overthrown in a palace coup led by the late Gen. Sani Abacha, who was the Defence Secretary in the Shonekan-led ING.

Prior to his brief political career, Shonekan was the chairman and chief executive of the United African Company (UAC) of Nigeria.