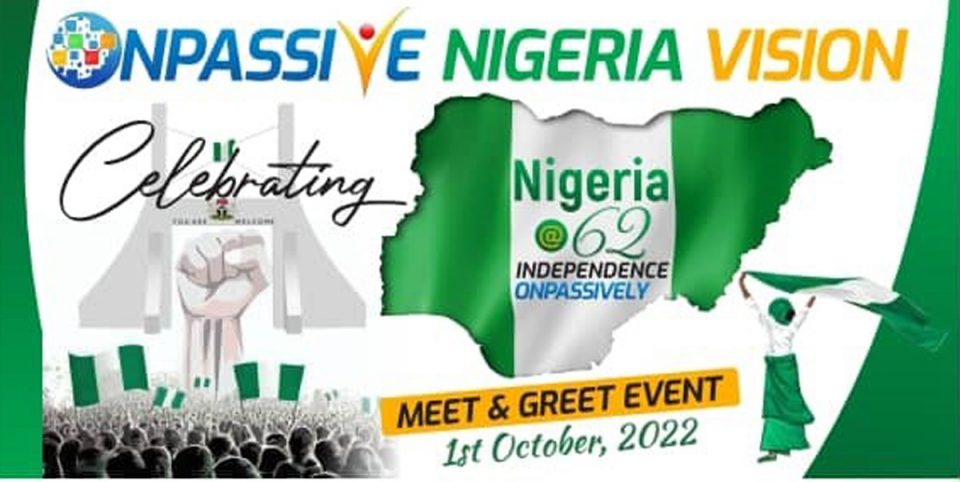 Mr Charles Azih, one of 1.4 million Ofounders ,(visionaries)proudly claims when ONPASSIVE launches,goods and services globally, Nigeria and Nigerians will be given the opportunity to be a part of a digital revolution,fondly referred to as the INTERNET QUAKE.

Mr Azih disclosed this to newsmen in Lagos on Saturday, during the commemoration of the Independence day.

He said that the founders are here today to do a meet and greet of fellow ONPASSIVIAN Ofounders..Hundreds of people from Lagos and environs meeting and greeting for the first time in the spirit of ONPASSIVE

Azeh said…consider today as a double celebration that will be replicated across the cities of Abuja,Kaduna,Asaba,Ibadan, and of course Lagos .

ONPASSIVE is a real brick and mortar company with an executive head office in Orlando Florida USA 🇺🇸 and other offices in Hyderabad,India,Singapore….and Dubai

Apparently some of these products are ready for market and are going through a final testing stage called “BETA” testing.

Speaking….Mr Rafiu Sarumi, also a founder,said that ONPASSIVE was the brain chiid of CEO, Ash Mufareh.

Sarumi said that men and women from every walk of life caught Mufareh’s vision and joined as “Go-Founders ” today we are known as Ofounders he didn’t explain the reason for the change,but did say that the founders position was no longer available.

Today was a memorable day for Mr Sarumi because he was able to make direct physical contact with men and women whom without ONPASSIVE, he would never have known.