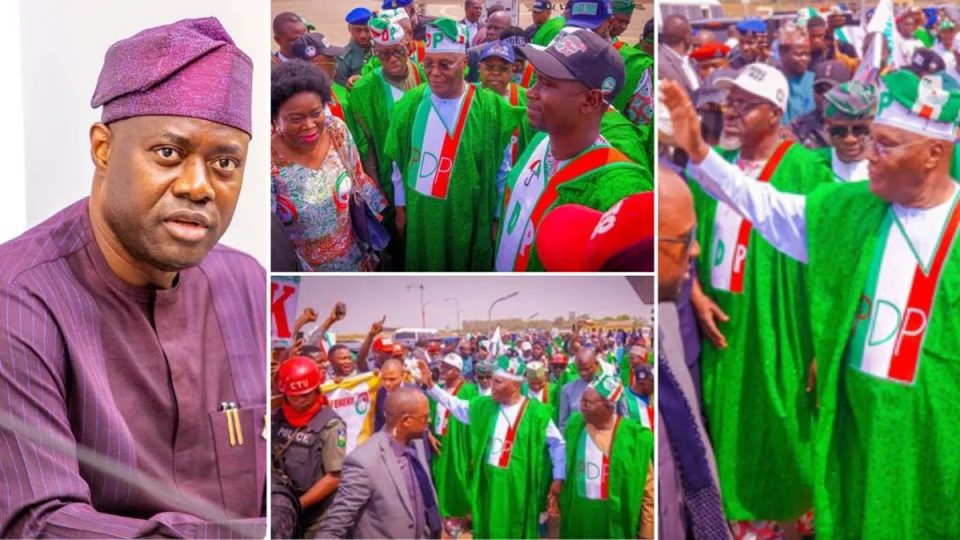 The Oyo State Governor, Mr. Seyi Makinde, a PDP member and one of the PDP aggrieved governors known as the G-5, and his deputy, Bayo Lawal, ignored the PDP presidential rally held for Atiku and his running mate, Senator Ifeanyi Okowa, in Ibadan.

Although the National Chairman of the PDP, Chief Iyorchia Ayu, commended Governor Makinde for providing a conducive environment and venue for the event, turnout of supporters was far less than expected.

Oyo was the first state controlled by G-5 governors that hosted the PDP presidential campaign train.

The Olubadan of Ibadanland, Oba Lekan Balogun, who was a senator between 1999 and 2003, urged the PDP candidate to reconcile with the governor.

However, a member of G-5, Benue State Governor Samuel Ortom, explained why the five governors cannot join the Atiku campaign.

Speaking in Abuja, he accused the PDP leadership of arrogance, impunity and mischief in handling the rift between Atiku and the aggrieved governors.

Ayu, who according to The Nation, fired salvos at the G-5 at the campaign rally, said some individuals will not be allowed to control the party.

Makinde’s absence at the Ibadan rally robbed it of the usual huge crowd. Although, Atiku and his team hailed the governor for allowing the rally to hold and mobilising supporters, the crowd fell short of what is usually experienced at Mapo Hall during campaigns.

Supporters usually storm the hall and its environs, creating traffic snarl for motorist. But yesterday’s crowd only filled the frontage of the hall while residents were going about their normal businesses around the hall, The Nation reported.

Makinde’s absence confirmed that the protracted crisis in the party has not been resolved, five weeks to the election.

The G5 governors are demanding the resignation of Ayu, to allow a Southerner take over to foster inclusion. Apart from Makinde, other members of the group are Nyesom Wike (Rivers), Samuel Ortom (Benue), Okezie Ikpeazu (Abia) and Ifeanyi Ugwuayi (Enugu).

Although Atiku and other party leaders spoke glowingly about Makinde at the event, it was clear that all was not well with the PDP, nationally, and in Oyo State.

Oyo State PDP chairman Dayo Ogungbenro praised Atiku and members of his campaign team, stressing that the party was lucky to have them as leaders.

He said: “PDP is blessed to have this calibre of people. It shows that our party will go places.”

Ogungbenro, who urged the people to vote for PDP, added: “I’m sure that come February 25 and March 11, we shall all rejoice. I am assuring all our leaders that Oyo State is PDP.”

Urging the national leaders to mend fences with the G5, Ogungbenro said: “But It will be better for us to go into this election together as one.”

A chieftain, Senator Hosea Agboola, who is a strong ally of Makinde, assured that the people would vote for Atiku.

Tambuwal highlighted the political significance of Mapo Hall and Ibadan as the melting pot of politics in Southwest Nigeria. He urged the people to vote for PDP candidates.

Okowa described his visit to Ibadan as homecoming, having graduated from the University of Ibadan in 1981.

Urging voters to vote for PDP, the Delta State governor said: “Use your PVC to speak and save Nigeria. Let’s build a future for our youths together. It’s about experience. Atiku has the experience to take us out of the woods. Atiku with the rest of us can rebuild Nigeria. Take the campaign from market to market. PDP knows what to do. We have done it before, and will do it again.”

In apparent reference to the party crisis, Ayu said his team would not allow any individual to control the party again.

He described Makinde as a “strong PDP member, a member of the family,” adding: “You sometimes have disagreements in a family. I as the father of PDP in Nigeria, am calling all our aggrieved members to come back home because we shall win at every level. Of course, we are going back to the villa. We shall be inaugurating the president this year. By the grace of God, in May, Atiku Abubakar and Ifeanyi Okowa will enter the villa.”

Atiku reiterated his promise to restructure Nigeria, in accordance with the yearning of the Southwest.

He said: “Southwest has been known to agitate for restructuring. By restructuring, we mean giving more power or autonomy and money to the states. It is one of the five pillars of our programmes. This is a commitment. Again, we are committed to ensuring there are no strikes in our universities, meaning that we will fund our universities and pay our teachers on time so that we don’t have any disruptions in our academic activities. Southwest is also known to be a business centre. That’s why in our economic programme, we are committed to making sure that industrialisation of Southwest is achieved …”

Atiku also promised to tackle insecurity, lamenting that the APC administration has failed in all its commitment.

Oba Balogun urged Atiku to reconcile with Makinde and other G-5 governors. The monarch, who described Atiku as his friend, said he was not happy with the crisis in the party.

Receiving Atiku, who was on a courtesy visit to his palace, the monarch said reconciliation is critical to his victory at the poll.

Atiku said PDP government would make traditional rulers relevant, particularly at this time the country is experiencing many security challenges.

He added: “I remember the role of the traditional institution during the colonial era when they were responsible for maintaining law and order in their respective domains. PDP government will look into all these institutions to bring about a safer and more united Nigeria.”

In Abuja, Ortom accused the PDP leadership of arrogance, impunity and mischief. He told reporters: “No efforts by the leadership of our party have been able to address the issues that we are raising. They have not been able to adopt methods that will pacify and placate the G-5. This is not right. So, on the G5, that is where we are.

“Arrogance, impunity, mischief, will not really help matters. One would expect humility; it is said that you stoop down to conquer, even if you want to make it.”

The governor expressed disappointment with some PDP leaders in the South who abandoned the demand for power shift to the region.

He said: “I must say that I am disappointed with some of our PDP southern governors who abandoned out, who sold out and chose to do something else.

“In the APC, all the governors in the North allowed for power shift, even when they have a majority. I must commend them for fighting for equity, fairness and justice because they considered that the presidency should go to the South.

“We (G-5) are committed to issues of integrity, issues of fairness, equity, and justice.”

Ortom said the G-5 was on course, adding that it will not back down on its demands. He said the five governors had given the PDP leadership ample time to address the issues at stake.

He added: “I think we are on course as far as I am concerned with our group. As faithful party men, we have given enough time. And we are told that the failed leadership at the national level will take advantage of the opportunity we have given them to address those issues.

“There are many ways of addressing issues, even when you are not able to meet the demands of a group or individuals.

“And then, you find a meeting place where people decide to be arrogant, where they decide to be mischievous and do things as if the other person does not exist and try to do some things with impunity, as if they have won election and they don’t need any other person. It becomes a problem.”

Omicron: FG May Review BASA with United Kingdom over Inclusion of Nigeria on Red List

Taskforce set to remove illegal structures in Lekki from Dec. 21