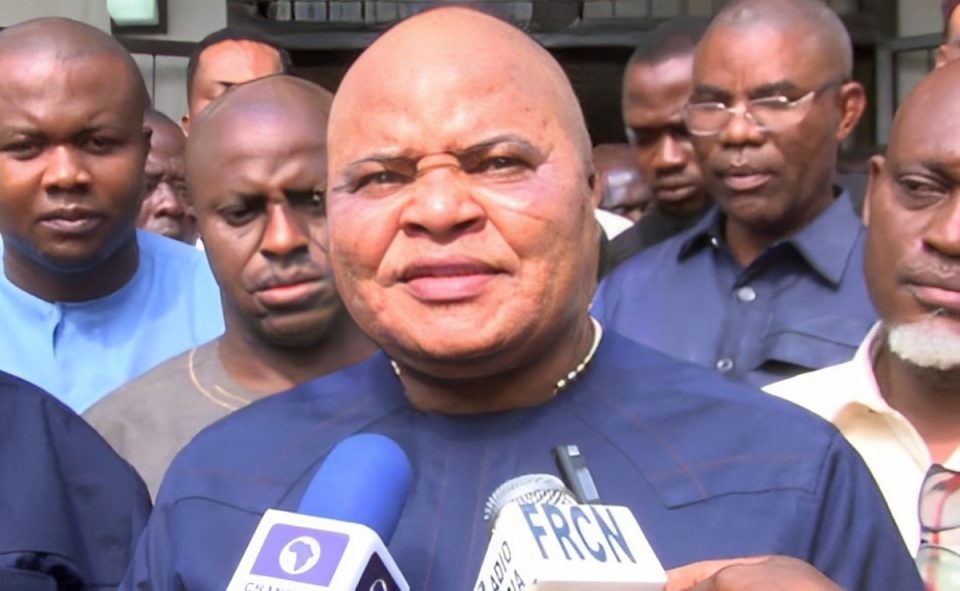 There was drama at the Federal High Court, Abuja on Monday as two Senior Advocates of Nigeria, SANs, representing the Nigeria National Petroleum Company, (NNPC) in the N100 billion suit filed by Sen. Ifeanyi Ararume against the company walked out on the court.

Prof. Kanyinsola Ajayi, SAN, and Mr Etigwa Uwa, SAN, counsel to the NNPC, walked out of the courtroom following their failure to get the judge, Justice Inyang Ekwo to hear only their application for a stay of procedings in the suit.

Ajayi, after identifying his processes, prayed the court to allow him argue his application for stay of procedings in the matter pending the hearing and determination of the appeal against the ruling of the court delivered on Jan. 11.

Leading other lawyers on behalf of the NNPC, Ajayi insisted that it was in the spirit of fair hearing to allow him move the application for stay of procedings and a ruling delivered before delving into other applications and the substantive matter.

The lawyer made frantic attempts to make the judge agree with his submissions but when he saw that his efforts were not yielding positive results, he offered to withdraw his representation.

When the judge refused to acknowledge his withdrawal, Ajayi and his brother silk, Uwa as well as all the counsel they were leading in the matter walked out of the courtroom without putting up a defence for their client.

Justice Ekwo, had told counsel to move all their applications together saying that he would deliver separate rulings in each of the applications so as to save judicial time of the court in line with the provisions of the Practice Direction of the Federal High Court.

The judge asked the lawyers to go ahead and adopt their processes.

“Prof. Ajayi, even if you do not adopt your processes, it will be deemed as having been adopted.”

Before adopting his processes, counsel to Ararume, Mr Chris Uche, SAN, told the court that the motion for stay of procedings had not been served on him but the judge asked that the process be served on him in court, which was done.

Uche prayed the court to invoke the Company and Allied Matters Act (CAMA) to nullify the removal of his client as Chairman of NNPC.

The senior lawyer told the court that the federal government acted outside the law when it removed Ararume after registering the oil company in his (Ararume’s) name.

According to Uche, the action counsel to the 2nd defendant has put up before this court is a clear sign that they have no defence in this case.

He urged the court to enter judgment in his clients favour.

For his part, counsel to the Federal Government, Mr Abubakar Shuiabu, asked the court to dismiss the suit in its entirety with substantial cost.

Shuiabu argued that the suit was against the principles of Section 2 (a) of the Public Officers Act and as such was incompetent.

For his part, counsel to the Corporate Affairs Commission, (CAC), Mr Akeem Mustapha, SAN, also prayed the court to decline jurisdiction to hear the suit.

Mustapha submitted that the CAC did not play any role in the removal of Ararume.

According to him, our role is only to collate documents, file them and make them available to the public.

He, however, added that Ararume’s appointment was a political one and that it was trite law that he who had the powers to hire could also fire.

After taking submissions from Ararume, the federal government and the CAC, Justice Ekwo fixed March 28 for ruling and possible judgment in the matter.

Ararume dragged the federal government, NNPC and CAC to court praying the court to declare his removal illegal, unlawful, unconstitutional and a total breech of CAMA law under which NNPC was incorporated.

He prayed the court to make an order returning him to office and to order the defendants to pay him N100 billion as compensation for the damages he suffered nationally and internationally because of his unlawful removal as Chairman.

Nigeria’s demand for petroleum products to increase by 14.6% in 2025