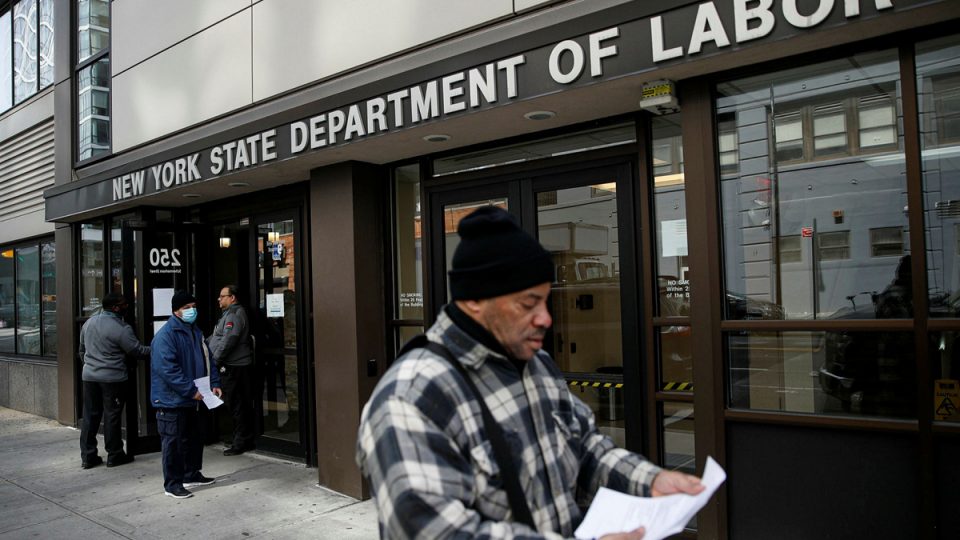 Nearly 3.3 million people applied for unemployment benefits last week in the U.S. amid unprecedented economic closures due to the coronavirus pandemic, according to data released by the Labour Department on Thursday.

The figure, a key barometer of the financial havoc caused by the outbreak, jumped from 282,000 applications the week before.

“In the week ending March 21, the advance figure for seasonally adjusted initial claims was 3,283,000, an increase of 3,001,000 from the previous week’s revised level,” according to the Department of Labour report.

The period measured coincided with non-essential businesses across the country being shuttered and tens of millions of people ordered to stay at home.

Industries like airlines, travel, restaurants, hospitality and retail have been severely impacted, with many companies announcing lay-offs.

The Department of Labour wrote that “the extraordinary increase in initial claims are due to the impacts of the COVID-19 virus,” with states citing “services industries broadly, particularly accommodation and food services.

The virus outbreak has derailed a U.S. economy that enjoyed 50-year lows in unemployment and record highs in the stock market just two months ago.

For the entire month of March in 2019, unemployment claims were just under 170,000 in the country’s most populous state.

Last week, the Department of Labour report showed 282,000 people filed for unemployment benefits, a jump of 33 per cent from the week before with those numbers largely coming before the harshest shutdown measures were taken.

A massive stimulus package, estimated at two trillion dollars, is aimed at helping workers and businesses that have been affected by the economic slowdown.

U.S. stocks rose on the open following the Senate’s approval of the massive stimulus bill late on Wednesday and in spite of the unemployment claims report.

The S&P 500 was up 2.1 per cent, while the Dow Jones Industrial Average was up about two per cent. The tech-heavy Nasdaq rose 2.1 per cent.

President Donald Trump on Tuesday said he wanted the country’s economy to largely reopen for business by the Easter holiday on April 12, in spite of warnings from public health officials and a rapidly expanding coronavirus outbreak that is doubling every three days in New York State.

There are more than 69,100 confirmed coronavirus cases in the U.S., and more than 1,000 deaths, according to data compiled by John Hopkins University.

Oil price up as Trump calls OPEC to lower prices