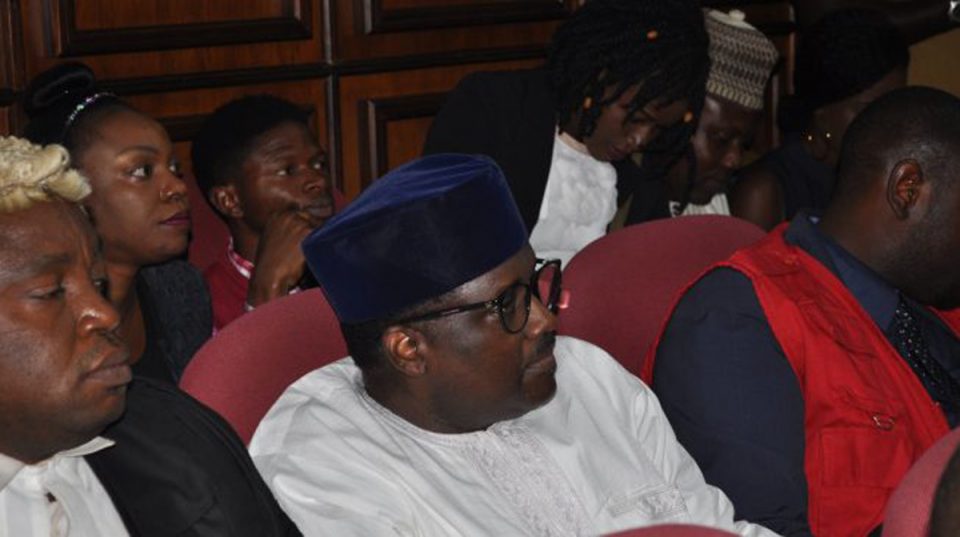 He was flown to the Nnamdi Azikiwe International Airport, Abuja, aboard an NPF jet that landed at 2.17pm.

The fugitive, who jumped bail in September, was apprehended in the Nigerien capital on Monday by operatives of the International Criminal Police Organisation, National Central Bureau, Abuja, in collaboration with their Nigerien counterparts.

Our correspondents gathered that Maina was being held at a detention facility and would be interrogated before being handed over to the Economic and Financial Crimes Commission or the Nigerian Correctional Service for remand in the Kuje custodial facility.

“Yes, he has been extradited back to Nigeria,” he said on the phone.

In a related development, the Federal High Court in Abuja, on Thursday, admitted 18 documents as exhibits in the ongoing N2bn money laundering trial of Maina.

Neither Maina nor his lawyer was present during the proceedings.

Maina, who had jumped bail and fled to Niger Republic, was only extradited to Nigeria on Thursday at about the time his trial was going on at the court.

Justice Okon Abang had, in a ruling delivered on November 18, 2020, revoked the bail granted the defendant, ordered his arrest, and directed that his trial would proceed in absentia.

Senator Ali Ndume, who stood as surety for Maina before he jumped bail, was remanded by the court in the Kuje Correctional Centre before he was later released on bail.

Three trial sessions have since held with the prosecution witnesses testifying and exhibits being tendered without any challenge from the defence.

The Economic and Financial Crimes Commission’s prosecuting counsel, Mohammed Abubakar, tendered 18 exhibits through the prosecution witness during the trial session.

The witness, an EFCC investigator, told the court that the sum of N500m was discovered in the bank account of another company that was traced to the defendant, Kangolo Dynamic Cleaning Services Limited.

She told the court that investigation revealed that Maina had while serving as chairman of the PRTT, operated a dollar account, which had an inflow of over $460,000 “mostly in cash”.

She said during a search, documents of 32 landed assets in Nigeria linked to Maina and his family members were discovered.

She said the commission also recovered some hard discs and flash drives in his possession, which contained details of some of his investments in Dubai and the US.

Ibrahim stated, “We also recovered some hard discs and flash drives in his possession, which contained details of some of his investments in Dubai and the US.

“Particularly in Dubai, investigation revealed that his company, North Rich Properties, owned over 50 cars that were used for transport business.

“Investigation also revealed that he owns a villa in a highbrow area of Dubai. His wife, Laila, also owns a cleaning services company called Spotless & Flawless.”

France to invest in French language promotion in Nigeria

Successful listing of Airtel into NSE will deepen market – Expert